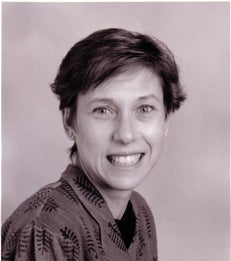 Jeanne Calderon joined New York University Stern School of Business in 1986, where she is a Clinical Professor of Business Law. Professor Calderon teaches in the undergraduate and graduate programs including the following courses: “Law, Business and Society,” “Professional Responsibility and Leadership;” and Real Estate Transactions.” She also has taught “Business Law for Managers;” “Business and its Publics;” “Markets, Ethics and Law;” and “Law for Accountants and Other Professionals.”

Professor Calderon is heavily involved in researching, writing and speaking about the EB-5 federal immigration investment program. She has testified on behalf of reform of this controversial program – before the House Judiciary Committee and Senate Judiciary Committee. Professor Calderon’s research and writing has been cited in many governmental and quasi - governmental reports.

She has been quoted in, and her work has been cited in, such publications as the New York Times, Wall Street Journal, Washington Post, Bloomberg Business Week, The Real Deal, The Commercial Observer, etc. She has been interviewed by media outlets including National Public Radio (NPR), Public Broadcasting Service (PBS) and CNN. Professor Calderon is continuing her work in this area and will release additional papers in the upcoming months.

Since Spring 2014, Professor Calderon has sponsored students to assist her with research, data collection and analysis through Stern’s SPUR program. She also has been actively involved in the undergraduate Stern Honors Program and has served as a thesis adviser to NYU Stern seniors participating in this special research program.

Scholar-in-Residence Gary Friedland is quoted in a story examining how the coronavirus pandemic is impacting many hotels' ability to pay operating costs and debt service, from his research with Professor Jeanne Calderon

Scholar-in-Residence Gary Friedland comments on recently finalized legislation in connection with the EB-5 immigrant investor program, based on his joint research with Professor Jeanne Calderon

Scholar-in-Residence Gary Friedland is quoted in a feature article on Hudson Yards and the EB-5 Immigrant Investor Program, from his joint research with Professor Jeanne Calderon

Scholar-in-Residence Gary Friedland is quoted on his findings on the EB-5 Immigrant Investor Program, from his joint research with Professor Jeanne Calderon

Scholar-in-Residence Gary Friedland is interviewed about his joint research, with Professor Jeanne Calderon, on the EB-5 Immigrant Investor Program