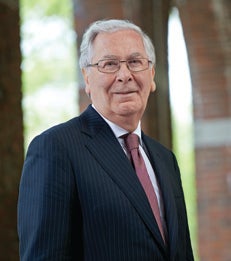 Lord King served as Governor of the Bank of England and Chairman of its Monetary Policy Committee from 2003 to 2013. He had been Deputy Governor from 1998 to 2003, Chief Economist and Executive Director from 1991, and a non-executive director of the Bank from 1990 to 1991.

Lord King was knighted (GBE) in 2011, made a life peer in 2013 and appointed by the Queen a Knight of the Garter in 2014. He is a Fellow of the British Academy, an Honorary Fellow of Kings and St. John's Colleges, Cambridge, and holds honorary degrees from Cambridge, Birmingham, City of London, Edinburgh, London Guildhall (now London Metropolitan University), London School of Economics, Wolverhampton, Worcester and Helsinki Universities. He is a Foreign Honorary Member of the American Academy of Arts and Sciences.

Quantitative Easing Is a ‘Dangerous Addiction’

Make No Mistake, the Risk of Inflation is Real

The Case for Post-Pandemic Pessimism

The Debate About Stimulus Is Missing the Point

The Biggest Covid Mistake Was Avoidable

The Perils of Meritocracy

Will the Fed’s New Approach Make Any Difference?

In a video interview, Lord Mervyn King discusses takeaways from his book, ""Radical Uncertainty,"" and what it means for economists and policymakers trying to adjust to the coronavirus crisis and look ahead to the future of the discipline

In a wide-ranging interview, Lord Mervyn King illustrates why the COVID-19 pandemic is a classic example of radical uncertainty

The Perils of Bogus Quantification

Lord Mervyn King warns against viewing the coming economic downturn in the U.K. like a conventional recession or depression, noting that the government is deliberately pressing down on economic activity to deal with the coronavirus crisis

Radical Uncertainty: Decision-Making Beyond the Numbers

Lord Mervyn King discusses how the coronavirus outbreak impacts decisions made by Central Banks, noting that the situation is much more difficult than dealing with the financial crisis