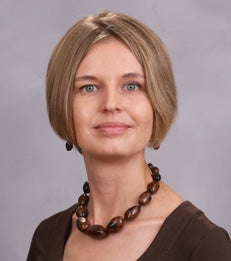 In her research, Professor Halaburda studies how technology changes economic forces and thus affects business models and interactions in the marketplace. One strand of her work focuses on competition between digital platforms. Since 2011, she has built a research program in digital currencies and blockchain technologies, including analyses of incentives in consensus protocols, cryptocurrency adoption, smart contracts, and token issuance. Professor Halaburda’s work has been published in Management Science, RAND, American Economic Journal, Games and Economic Behavior, and other academic journals. In 2015 she co-authored Beyond Bitcoin: The Economics of Digital Currency, the first book analyzing digital currencies from the economic perspective. The book’s 2nd edition, co-authored with Miklos Sarvary and Guillaume Haeringer, was published by Palgrave Macmillan in 2022.

Prior to joining NYU Stern, Professor Halaburda was an Assistant Professor at Harvard Business School, and a senior economist at the Bank of Canada.

There Is a Disconcerting Absence of Public Debate About the Privacy Issues That Surround Digital Central Currencies.

In a Q&A interview, Professor Hanna Halaburda shares her thoughts on the post COVID-19 financial paradigm and what it means for digital assets like cryptocurrency, citing Stern-led research on blockchain, smart contracts and FinTech

Will We Realize Blockchain’s Promise of Decentralization?