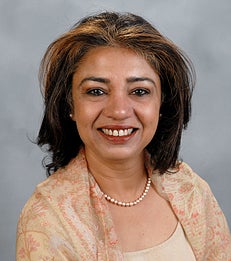 Prior to joining NYU Stern, Professor Raghubir was a professor at the Haas School of Business, University of California at Berkeley. She also taught at the Hong Kong University of Science and Technology. She has taught undergraduate, M.B.A, Ph.D. and executive education courses in China, France, India and the U.S.

Professor Raghubir's teaching interests are in the areas of marketing research, consumer behavior and marketing strategy, and her research interests are in the areas of consumer psychology, including survey methods, psychological aspects of prices and money; risk perceptions; and visual information processing. She has published more than 50 articles and book chapters in such journals as the Journal of Marketing Research, Journal of Consumer Research, Journal of Consumer Psychology and Marketing Science. She is currently serving as Co-Editor for the Journal of Consumer Psychology, and has delivered more than 100 presentations of her research at major universities, symposia and conferences around the world.

Additionally, Professor Raghubir has done executive teaching and consulted with Acufocus, Adobe, BioRad, Boston Scientific, Daimler-Chrysler, Google, Mastercard, PayCycle, University of California at San Francisco and the Centre for Executive Development at the Haas School of Business. She has also worked in the financial industry with Jardine Fleming and Citibank in Hong Kong and India.

Professor Raghubir received her undergraduate degree in Economics from St. Stephen's College, Delhi University; her M.B.A from the Indian Institute of Management, Ahmedabad; and her Ph.D. in Marketing from New York University.

Raghubir, Priya, and Geeta Menon (1998)
AIDS and Me, Never the Twain Shall Meet: Factors Affecting Judgments of Risk
Journal of Consumer Research, 25(1), June, 52-63

Not Concerned with COVID? That's Your Bias Speaking

Professor Priya Raghubir is interviewed about the controversy around Fridababy’s advertising campaign for its product, the Momwasher