Tackling Domestic Disinformation: What the Social Media Companies Need to Do 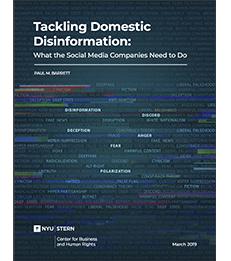 Authored by Paul Barrett, the Center’s deputy director, the report notes that domestic disinformation comes from disparate sources, including message boards, websites and networks of accounts on Facebook, Twitter and YouTube.

Increasingly, social media platforms are removing disinformation from Russia and other foreign countries because of its fraudulent nature and potential to disrupt democratic institutions. In contrast, some commentators have argued that misleading content produced by US citizens is difficult to distinguish from ordinary political communication protected by the First Amendment. According to this view, platforms shouldn’t be encouraged to make judgments about what’s true and untrue in politics.

But, the report argues, platforms are already making similar judgments when their algorithms rank and recommend posts, tweets and videos. They also remove certain categories of harmful content, such as harassment and hate speech. The report urges platforms to add provably false information to the removal list, starting with content affecting politics or democratic institutions. The First Amendment, which precludes government censorship, doesn’t constrict social media venues owned and operated by nongovernmental entities. The real question confronting the platforms, according to the report, is how to make their evaluations of factually questionable content more reasonably, consistently and transparently.