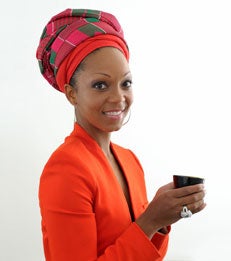 Through the TRIUM alumni network, I was able to make connections and build relationships around the world that have proven to be of true value to YSWARA.

At some point during her many years with General Electric Co., where she was most recently GE Transportation's Regional Director for the US $300 million Sub-Saharan subsidiary, Swaady Martin-Leke, Class of 2012, developed a dream. "I wanted to do something very different, something that promotes our African resources, culture and identity," she recalls. "It was my dream to capture true African luxury, change the world's perception of Africa and produce a luxury brand that is truly African in origin, nature and tradition." Swaady's dream of breaking out and doing something new motivated her to apply to TRIUM.

A winning team
The capstone project would become Swaady's launching pad. The team began with a goal of creating a new company that would be based in Africa and target the African and global luxury sector. It became the venture now called YSWARA, a high-end curator of gourmet African teas and accessories (www.yswara.com). Based in Johannesburg, the company's mission, according to Swaady, is "to unlock Africa's potential to produce superior quality products that appeal to a local and international audience while achieving societal impact" – in this case, creating jobs in the local economy. "I am passionate about changing Africa," she adds.

For Swaady, TRIUM was the indispensable key to unlocking the future she is now creating. "The program equipped me with the necessary toolkit to move from being a corporate leader in a big company to an entrepreneur. The professors and my fellow classmates have been amazing mentors and knowledge resources. Through the TRIUM alumni network, I was able to make connections and build relationships around the world that have proven to be of true value to YSWARA."
Share / Print