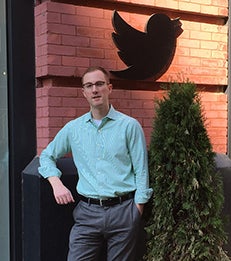 Master of Science in Business Analytics graduate Eric Sherman applies his education to his new role as head of US media research at Twitter.

I have a much broader perspective on topics in analytics and business now, and I know where to turn to dive deeper when I need to. - Alumnus Eric Sherman

Master of Science in Business Analytics graduate Eric Sherman applies his education to his new role as head of US media research at Twitter.

Eric Sherman credits NYU Stern’s Master of Science in Business Analytics (MSBA) program for making him a more knowledgeable, well-rounded analytics professional well-positioned to become head of US media research at Twitter. Eric moved into this new role in January 2015, several months after completing his Stern degree. Reflecting on the value of his MSBA degree, he says, “I have a much broader perspective on topics in analytics and business now, and I know where to turn to dive deeper when I need to.” Noting the access to Stern’s thought leaders, such as Professor Anindya Ghose, who opens the program with "Social Media and Digital Marketing Analytics," Eric adds, “I've also found it valuable working directly with the professors at Stern who are responsible for some of the latest research on topics of great professional interest to me.”

After working in several data-centric positions in consulting and advertising, Eric heard about Stern’s MS in Business Analytics program while at CNBC, where he was leading the network's digital analytics and TV sales research teams. “I was struck by how aligned the curriculum was with my interests and experience. I'd spent my career in analytics, and I thought the program would be a great way of getting some of the formal academic theory around the work I'd already been doing, learning about how analytics was being used in other fields – with hopes of getting some creative ideas to apply to my field – and diving into the details of some more advanced analytical techniques and approaches.”

Eric found all of these things in the MSBA program. As one example, for the MSBA capstone project, his team worked with CitiBike, the NYC Bikeshare program, to build a predictive model and optimization engine to help reduce station outages. “We spent a lot of time looking at creative ways to visualize station data and trip flows across New York City,” Eric recalls. “This introduction to geospatial analytics was directly relevant to me at Clear Channel Outdoor,” the billboard company at which he worked while in the program.

Eric’s current focus is on understanding how Twitter and other media, particularly television, work together. “If you look at some of what's been published on the topic,” he explains, “you'll see that there is an emphasis on delineating between causation and correlation, and we're beginning to see some interesting findings around predictive analytics. These are all topics we explored in-depth in the program, and it's been valuable to have thought deeply about many of these issues as they pertain to media, advertising and social networks.”