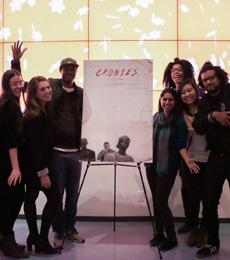 We wanted to focus on the audience and how we could best reach them, rather than focus solely on how to get into theaters.
Five second-year MBA students think beyond traditional industry channels to create an innovative distribution and marketing strategy for the independent film, CRONIES.
The story is a familiar one. Filming has wrapped, but, away from the camera, the magic of the movie industry is only beginning. The movie needs an audience, a significant component of a film’s success which can be particularly challenging for many independent filmmakers. When budgets are small and traditional distribution channels are not available, how can filmmakers identify and reach their viewers?

Five second-year MBA students tackled that very question over the course of a new Stern Signature Project, as they developed an innovative set of distribution and marketing strategies for the film CRONIES, directed by NYU Tisch alumnus Michael J. Larnell and executive produced by Tisch alumnus and Professor Spike Lee. Shot on location in St. Louis, Missouri, CRONIES tells the story of three young men and their changing perspectives on adulthood, friendship and moving on.

Working in collaboration with NYU Stern Professor Peter Newman and Miranda Sherman at the NYU Production Lab, the students – Vivian Dinh, Kamya Khanna, Phillip Landrum, Ronica Reddick and Anthony Weldon – held weekly meetings with their clients throughout the academic year to discuss goals, present their research and implement new deliverables. Within the span of a few months, they had proposed and executed on audience segmentation, PR strategies, ticket pricing models, a robust social media presence and a theatrical premiere hosted by the Independent Filmmaker Project (IFP).

“We wanted to focus on the audience and how we could best reach them, rather than focus solely on how to get into theaters,” Anthony explained.

Their strategy has paid off, as colleges and universities around the country have signed on to screen the film at events intended to foster discussions on diversity and inclusiveness in the US. Their hard work has garnered attention within the industry as well.  This spring the team was invited to present at South by Southwest (SXSW).

“SXSW provided a level of validation that we’re on the right track,” Vivian said. “As we listened to presentations and interacted with industry representatives on-site, we realized that we had learned so much throughout this process and now had expertise to share.”

Ronica concurred, saying, “This was a great opportunity to attend SXSW as thought leaders and speak with people and companies we might not have met otherwise. Working on this project has, in many ways, helped set us up for post-graduation success. I have more confidence navigating this industry because I know exactly what my value-add is.”

The knowledge they have acquired and the skills they have honed are cornerstones of Stern’s experiential learning offerings, Phillip said. “Stern instills in students an ability to adapt, to multitask and to see a problem from different perspectives in order to develop the best solution.”

Representing a broad spectrum of professional backgrounds – financial services, healthcare consulting, technology and the arts – before coming to Stern, the students say this project has helped clarify what an important role an MBA can play within the entertainment industry. “There’s such an entrepreneurial nature to what we’re doing,” Kamya reflected. “CRONIES has been an incredible opportunity to bring our different skills to the table, and we hope this project’s legacy will result in a methodology that can easily be applied to many other films in the future.”
Share / Print ▼