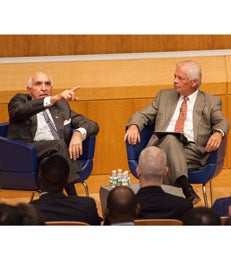 “A great leader gets people to do so much more than they thought they could,” said Mr. Langone to a packed auditorium of Langone MBAs. Mr. Langone spoke candidly on a variety of topics including successes, failures, ethics, governance and generational theft. Specifically, he advised: Watch the video:

Mr. Langone is Vice Chariman, NYU Trustees and Vice Chairman, Stern Board of Overseers. The Langone Program is named in his honor.
Share / Print