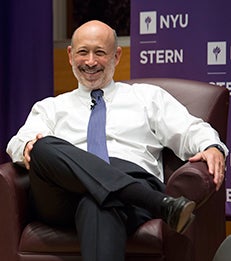 Have a plan but be prepared to change your plan. - Lloyd Blankfein

Lloyd C. Blankfein, chairman and CEO of Goldman Sachs, and John Sexton, president of New York University, sat down in February to discuss “Global Leadership in the 21st Century” before an audience of more than 400 students. Hosted by the NYU Leadership Initiative and the NYU Stern School of Business, the event drew undergraduate and graduate students from Schools across the University, including the College of Arts & Science, Graduate School of Arts & Science, Law School, Wagner School of Public Service and Stern.

During the hour-long interview, Blankfein and Sexton reflected on their friendship of 40 years, growing up in Brooklyn and how education played an important role in their personal and professional lives. Turning the conversation to leadership in today’s complex global markets, Blankfein shared some pieces of advice:
Share / Print