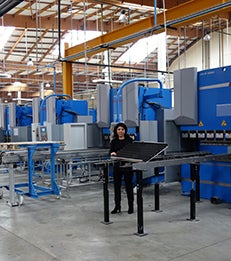 The world is changing, and to be successful, new ideas are needed. - TRIUM student Monica Messio Dungaciu

“I had hands-on experience and a lot of ideas, but intuition isn’t always enough,” TRIUM Global Executive MBA student Monica Messio Dungaciu says of her decision to enter the TRIUM program. “I needed to increase my business knowledge to raise my contribution to the next level.”

Monica and her husband launched Diane Industries, a manufacturing company for bakery equipment, in 2011. “The aim and the challenge for Diane Industries is to produce everything in France,” Monica explains. “No outsourcing; we want to bring jobs to France. In 2014, we launched production at our facility 150 kilometers (<100 miles) east of Paris. We now have 60 employees and expect to double in size. It’s a family business and we treat our employees that way. This company is my first entrepreneurial venture. I was proud of my contribution to growing the business, and I wanted to further my education to bring even more to the table as the company grows.”

“My career took several twists and turns before I became an entrepreneur,” Monica describes. “I started in medicine, as a nephrologist, and for six years, I worked as a doctor for the US military at NATO headquarters in Belgium. I then moved to the business side of medicine, working as a medical advisor for Roche pharmaceutical company in Paris.” Monica enjoyed this role, and when she returned to medical practice after moving to a new city, she recalls, “I felt like something was missing. I missed the business side.” She decided to pursue a Master’s degree in consulting at HEC, which opened a new opportunity: “I wrote my dissertation on organizational change, and since it was well-received, I began giving lectures after I graduated in 2011.”

At the same time, another opportunity presented itself: “My husband is an entrepreneur, with a family background in the bakery business,” Monica says. “In 2011, he started a new business to manufacture bakery equipment, and Diane Industries was born. I became involved in helping him launch the company and in developing the new business. I learned so much from the experience and felt like I contributed in really important ways to the company’s growth and success.” In 2014, with the company launched and growing, Monica entered the TRIUM Program. “I had incredible learning experiences, but as a doctor, I’ve always been ‘evidenced-based.’ I needed knowledge and credentials to back up my experience. It was an important next step in order to grow and to be able to give more within my role.” Monica is already applying her classroom knowledge to Diane Industries: “The world is changing, and to be successful, new ideas are needed. My education is filling in knowledge gaps and introducing me to a network of business leaders. It’s helping me to develop my ideas, think in new ways and build a successful company for the 21st century.”