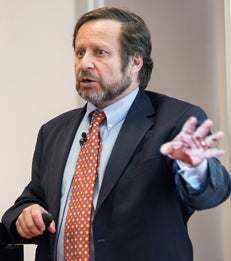 Modest reductions in emissions will only delay the rise in atmospheric concentration, but will not prevent it.

Steven Koonin, University Professor, professor of information, operations and management sciences at NYU Stern, founding director of NYU’s Center for Urban Science and Progress (CUSP) and professor of civil and urban engineering at NYU's Tandon School of Engineering, delivered a University Professorship Lecture entitled “Can We Ever Get to a Zero-emissions World?" on April 18. The event was hosted by Provost David McLaughlin and Dean Peter Henry.

Provost McLaughlin welcomed guests and shared some background on University Professorships, which are awarded to outstanding scholars whose work possesses a significant interdisciplinary dimension. Dean Henry introduced Professor Koonin as a colleague and theoretical physicist who influenced the field of climate science.

With over 20 years experience in the climate and energy space, Professor Koonin held prominent positions at BP and the US Department of Energy. Professor Koonin outlined the concerns of CO2 emissions, indicating that half of the CO2 emitted into the atmosphere stays there for centuries. As the population and demand for resources continue to grow, he noted, reducing emissions becomes increasingly difficult.

How will the world compensate for this increase in emissions? “Modest reductions in emissions will only delay the rise in atmospheric concentration, but will not prevent it.” Professor Koonin emphasized the need for local energy discussions, noting that a worldwide strategy is not the answer; what works in a city like New York will not necessarily work in a Nigerien city.

Professor Koonin also discussed a decarbonization strategy that includes cost-effective alternatives for transportation, electricity and heat. For example, light duty vehicles such as cars could eventually become electric and higher duty vehicles such as trucks could switch to biodiesel. According to Koonin, electrical power from renewables is somewhat limited because we don’t yet have the technology to store electrical energy in a cost-efficient way.

Professor Koonin concluded that a zero-emission world in the near future is unlikely. However, he summarized a long-term strategy on reducing emissions:
Share / Print