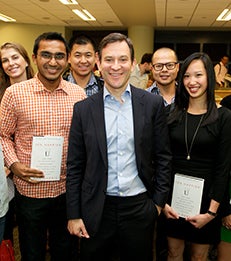 The Stern School believes in the tremendous potential of individuals to solve global problems through the power of business. - Caitlin Weaver, director of leadership development

This fall, NYU Stern and NYU’s Global Spiritual Life launched the Mindfulness in Business Initiative, which aims to integrate mindfulness into the core of leadership development for Stern MBA students. As a kick-off to this new initiative, bestselling author and ABC’s Nightline anchor Dan Harris shared his story with approximately 100 MBA students on campus. Harris, the author of 10% HAPPIER: How I Tamed the Voice in My Head, Reduced Stress Without Losing My Edge, and Found Self-Help That Actually Works—A True Story, spoke candidly about his personal journey and described his strategies for remaining calm, managing stress, maintaining focus and being happy – all while juggling the demands of a fast-paced and often stressful career and personal life.

Harris began his talk reflecting on a panic attack that he experienced during a live broadcast of “Good Morning America.” As fate would have it, Harris was assigned to the “faith and spirituality” beat at ABC News soon after the episode, and found himself somewhat reluctantly researching the areas. After reading work from several spiritual gurus, including Eckhart Tolle and Dr. Mark Epstein, one notion in particular – the “voice in the head,” as Tolle referred to it, or the “monkey mind,” as Epstein called it – resonated with him.

Add that to an avalanche of new scientific research indicating that meditation and mindfulness practices have real benefits – better focus, increased productivity and more – and Harris was convinced to give it a chance. 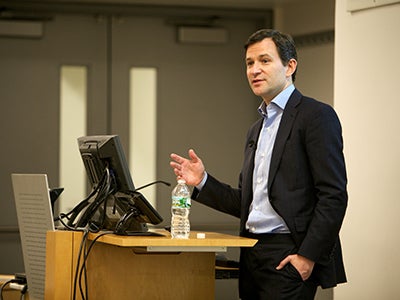 Now a self-proclaimed evangelist for mindfulness meditation, Harris argues that a regular practice (even just five minutes a day) offers a game-changing proposition – the ability to recognize what’s going on in your own mind without reacting blindly but instead responding wisely. He goes on to call it a “super power,” listing a number of organizations, industries and individuals who have fully embraced the benefits of meditation, including General Mills, P&G, Google, Aetna, the Marines, Katy Perry, 50 Cent, Silicon Valley, Wall Street and the Seahawks.

“The Stern School believes in the tremendous potential of individuals to solve global problems through the power of business,” wrote Caitlin Weaver, director of leadership development at Stern, and Yael Shy, senior director of NYU Global Spiritual Life, in a recent article for The Huffington Post. “As business students trained in mindfulness move into leadership positions, they will bring with them a new paradigm for leadership excellence that drives business results while focusing on compassion, self-awareness, courage and resilience personally, interpersonally and organizationally.”

The Mindfulness in Business Initiative is funded by a grant from the Lenz Foundation.