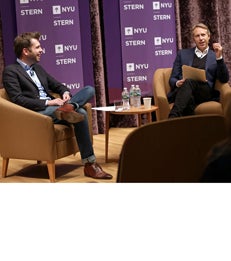 Think about the one observation you believe to be true that hasn’t been discovered yet, and then pursue that missing gap.

Handy, a New York-based company founded in 2012, is a platform that connects individuals looking for household services with top-quality, pre-screened independent service professionals.  In Hanrahan’s view, “Every startup has to figure out how their story is relevant to their mission.” In the case of Handy, it was finding a convenient and easy way to match their customers to trusted professionals.

With the rise of the sharing economy and changing American workforce, Handy has played an active role in advocating for legislation that creates a new a model of worker protections and benefits to support independent contractors. Hanrahan understands how important it is to keep workers happy and empowered, “The motivation for work has and continues to change.”

How else does Handy maintain their competitive advantage? Hanrahan outlined three questions he asks himself — and that others considering an entrepreneurial path can utilize — that guide his decision-making process at Handy: Hanrahan also touched upon Handy’s innovative marketing techniques that effectively communicate the company’s story and attract new customers, including subway advertisements. He noted the ads were a perfect opportunity to increase brand awareness and tap into their target market.