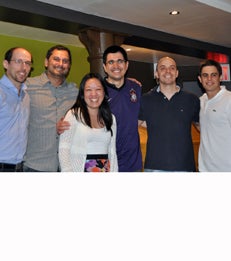 Six students in Stern’s MS in Risk Management program completed a capstone project to determine Brazil's capacity to service its external debt in the event of changes to the global economy.

The capstone project’s greatest value is that it allowed us to apply what we learned in class to something that was functional in the real world. - Ignacio Saralegui

Six students in Stern’s MS in Risk Management program completed a capstone project to determine Brazil's capacity to service its external debt in the event of changes to the global economy.

“Brazil has experienced many ups and downs in its economic history,” notes Rodrigo Figueroa, a student in NYU Stern’s MS in Risk Management program. “There has been an interesting transformation of the country in recent years and robust levels of growth, but the team wanted to examine the data rigorously to determine whether the country’s success is sustainable this time.” A key component of the MS in Risk Management program is the strategic capstone project. Students tie together the substantive content and practical case work taught throughout the year in a concrete risk analysis presented at the culmination of the program. Rodrigo was a member of a capstone team seeking to determine Brazil’s capacity to service its external debt in the event of changes in the global economic environment.

Rodrigo worked with teammates Caio Banti, Angelica Sakurada, Enrico Sanches, Ignacio Saralegui and Daniel Vieira on the project. “Our whole team has ties to Brazil,” notes Rodrigo, and they are well acquainted with the country’s rocky economic history. As outlined by Caio, Brazil has defaulted five times in its history, and twice in the 20th century. The country appeared to be on an upward trajectory during a period of debt-fueled economic growth in the 1970s but suffered a severe financial crisis after the second oil shock in 1979, leading to the country’s most recent default in 1983 and a “lost decade” of hyperinflation and successive crises. The students wanted to determine if the country was destined for a similar fate again or if the economic trajectory was more stable this time.

“We were able to pull a great deal of data from the IMF, World Bank and Central Bank of Brazil to use in our risk analysis,” reports Ignacio. “Brazil is a very sophisticated country already, and there was a very good set of information we were able to recover,” adds Rodrigo. “Because the country is so in vogue right now, we could also refer to what all the analysts were saying.” Enrico notes that the group drew additional inspiration from This Time Is Different: Eight Centuries of Financial Folly, co-authored by Carmen Reinhart and Kenneth Rogoff. “Once we had our data, we used a scenario analysis technique to test how Brazil would fare in a wide variety of economic situations,” Rodrigo reports.

As the team began to work on their project, they also drew from their resources at Stern. “We knew Brazil had a lot of material we could use, but it wasn’t clear to us how we would use it,” recalls Rodrigo. “Our project mentor and advisor, Professor Thomas Pugel, helped us find that way. He has such a wealth of knowledge and he challenged us to get the right data, i.e., identify key risk indicators. He helped us structure our work, and also offered economic theory and his perspective on global economics. Our class with Professor Ingo Walter was integral as well. He wrapped up his lessons on sovereign crises with a very helpful framework that was exactly what we needed to structure our project.”

The students’ comprehensive research ultimately indicated that “Brazil is significantly more resilient than in the past, and therefore equipped to sustain sizeable external shocks without falling back into default within the next five years.” Rodrigo notes, “We wanted to make sure that at the end of the project we had something useful and tangible for anyone with investments or interest in investments in Brazil,” and the students have seen initial interest in the report from several parties. Daniel reports, “We recently spoke to the CEO of a global risk management services firm, and he was very interested in our report because he gets these specific questions from investors.” Caio adds, “People get excited about the report when they hear the title ‘Brazil: Is This Time Different?’ because it speaks to their experience with the ups and downs of the Brazilian economy. It is attracting a lot of attention.”

“The capstone project’s greatest value is that it allowed us to apply what we learned in class to something that was functional in the real world,” notes Ignacio, but one of the other rewarding aspects of the project was found in their positive results: “I think the most significant aspect of our findings was that I am Brazilian and it was very nice to reach a positive conclusion with so much certainty,” says Daniel. Angelica adds, “Most of us in the group grew up in a time that was very tough economically in Brazil. It’s great that we can see through our analysis how much better the economy is doing now.”
Share / Print