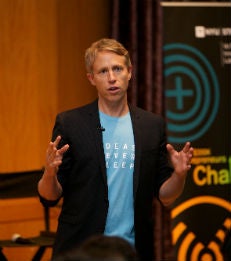 In the end, each team emerged with a new business concept that imagines a powerful market disruption and a plan to transform it into reality. - Professor Luke Williams

At the conclusion of an eight-month competition, NYU’s most promising innovators received a combined $200,000 in start-up cash at the annual $200K Entrepreneurs Challenge, held by NYU Stern’s Berkley Center for Entrepreneurship & Innovation. The three winning teams – composed of students, faculty and alumni from across the University – were chosen after pitching their ideas and enduring Q&A by judges from venture capital, technology and design, and social enterprise sectors.

New Venture Competition Winner
The $75,000 Rennert Prize, made possible by a gift from Stern Board of Overseers member Ira Leon Rennert (MBA ’56), was awarded to RecoverLINK. Started by NYU Stern alumnae Laurie Thackeray (MBA ’12) and Christina Anzalone (MBA ’12), along with Maggie Doll, Genna Doll and Bhavya Dhulia, RecoverLINK is a mobile healthcare technology designed to transform how heart failure patients experience care and recovery after being discharged from the hospital. Founded by NYU student Edwin Reed-Sanchez from the Tisch School’s Interactive Telecommunications Program (ITP), along with Ariel Hamilton and Thomas Pruitt, SayCel provides emergency and low-cost cellular service to regions around the world without cellular coverage as well as areas where the cost of communication is prohibitively expensive. SayCel currently runs a cellular network in Little Corn Island, Nicaragua. “Over the past eight months, our 14 finalists were provoked, prodded and praised by our coaches, mentors and evaluators,” explained Luke Williams, executive director of NYU Stern’s Berkley Center for Entrepreneurship & Innovation. “In the end, each team emerged with a new business concept that imagines a powerful market disruption and a plan to transform it into reality.”

“Entrepreneurship is a true team sport,” said Frank Rimalovski, executive director of the NYU Entrepreneurial Institute and managing director of the NYU Innovation Venture Fund. “This year’s fourteen finalists were composed of team members from seven different NYU schools and colleges. The Entrepreneurs Challenge provides a unique opportunity for entrepreneurs from across the University to come together and receive the training, support and mentorship to help get their ideas and inventions to market.”

“This year, we saw new ventures addressing a number of business, global and societal issues including detecting mental health disorders to aid in effective intervention; rehabilitating water and sanitation infrastructure systems for schools in Ghana; and offering an affordable means to address a common ailment among women and girls in the developing world who are afflicted with a permanent birth injury,” said Jill Kickul, director of Stern’s Program in Social Entrepreneurship.

Each finalist team delivered a three-minute pitch followed by a short “Explainer Video” before an audience of NYU students, faculty and alumni, who voted for their favorite teams. This year, Ephemeral, VVF Cup and MedTimers received the Audience Choice Awards.

In recognition of the critical role volunteers play in mentoring, coaching, and judging the teams throughout the competition, Jo Singel received this year’s Volunteer-of-the-Year Award, presented by the Berkley Center’s Loretta Poole.

New this year, a Microsoft Award, recognizing the best use of technology, was presented by Maria Naggaga, a tech evangelist at Microsoft, to WizArt, RecoverLINK and CookScience.