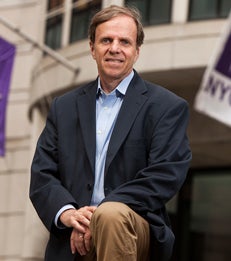 Michael H. Posner is the Jerome Kohlberg Professor of Ethics and Finance at NYU’s Stern School of Business. He is the Director of the Center for Business and Human Rights at the School, the first-ever human rights center at a business school. Prior to joining NYU Stern, Posner served in the Obama Administration from 2009-2013 as Assistant Secretary of State for the Bureau of Democracy, Human Rights and Labor. In 2010 he chaired the Voluntary Principles on Security and Human Rights. From 1978 to 2009, he led Human Rights First, a New York-based human rights advocacy organization.

Posner is recognized as a leader and expert in advancing a rights-based approach to national security, challenging the practice of torture, combating discrimination, and refugee protection. He is a frequent public commentator on these issues, and has testified dozens of times before the U.S. Congress. As Assistant Secretary, Posner traveled extensively, representing the U.S. Government to foreign officials and representatives of civil society in countries of strategic importance to the United States, including China, Russia, Egypt, Burma, Bahrain, Nigeria, Afghanistan, and Pakistan, among many others.

Throughout his career, Posner has been a prominent voice in support of human rights protections in global business operations in the manufacturing supply chain, the extractives industry, and the information and communications technology sector. As a member of the White House Apparel Industry Partnership Task Force in the mid-'90s, he helped found the Fair Labor Association (FLA), an organization that brings together corporations, local leaders, universities, and NGOs to promote corporate accountability for working conditions in the apparel industry. He was a founding member of the Global Network Initiative, a multi-stakeholder initiative aimed at promoting free expression and privacy rights on the Internet, and has spoken widely on the issue of Internet freedom. Posner spearheaded the U.S. Government's efforts to enhance the effectiveness of the Voluntary Principles on Security and Human Rights, which works to improve human rights around oil, gas, and mining operations.

Posner played a key role in proposing and campaigning for the first U.S. law providing for political asylum, which became part of the Refugee Act of 1980, as well as the Torture Victim Protection Act, which was adopted in 1992. In 1998, he led the Human Rights First delegation to the Rome conference at which the statute of the International Criminal Court (ICC) was adopted.

Before joining Human Rights First, Posner was a lawyer with Sonnenschein, Nath & Rosenthal in Chicago. He lectured at Yale Law School from 1981 to 1984, and again in 2009, when he taught with former Dean Harold Koh. He was a visiting lecturer at Columbia University Law School from 1984 to 2008. A member of the California Bar and the Illinois Bar, he received his J.D. from the University of California, Berkeley Law School (Boalt Hall) in 1975, and a B.A. with distinction and honors in History from the University of Michigan in 1972. Posner resides with his family in New York City.

How To Make ESG Investing Real and Meaningful.

Why Global Sports Events Must Include Attention to Human Rights.

Why the U.S. Should Speed Solar Production That Doesn’t Depend on China.

At COP 27 in Egypt, Climate Accountability Will Be Challenging.

How the U.S. Should Protect Haitian Refugees.

How the UN and Its Member States Can Reassert Global Leadership.

At Fashion Week, the Apparel Industry Needs to Redefine "Sustainability."

On ESG Investing, The Economist Offers The Right Diagnosis But A Faulty Prescription.

Why Patagonia CEO Ryan Gellert is Right About Corporate Taxes.

Why University Endowments Should Hire Investment Firms Owned By Women And Minorities.

Reassessing The Fist Bump: Biden's Blunt Talk Is More Important Than How He Greeted a Saudi Leader.

YouTube Amplifies Misinformation And Hatred, But Here’s What We Can Do About It.

Why Elon Musk Is The Wrong Man To Take Over Twitter.

As the World Cup in Qatar Approaches, it’s Time to Protect Migrant Workers