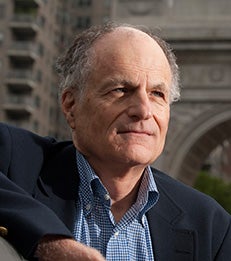 Thomas J. Sargent, a macroeconomist, joined New York University as the first W.R. Berkley Professor in September 2002, a joint appointment by the Economics Department at NYU's Faculty of Arts and Sciences and the Stern School of Business. He was awarded the 2011 Nobel Prize in Economics, shared with Princeton University's Christopher Sims, for his empirical research on cause and effect in the macroeconomy.

Professor Sargent earned his Ph.D. from Harvard University in 1968 and was a first lieutenant and captain in the U.S. Army. He was a university medalist as Most Distinguished Scholar in the Class of 1964 and won the Nemmers Prize in Economics in 1997. Professor Sargent was elected a fellow of the National Academy of Sciences and a fellow of the American Academy of Arts and Sciences, both in 1983.

Professor Sargent is past president of the Econometric Society, the American Economic Association and the Society for Economic Dynamics.

B.A., 1964
University of California at Berkeley

Professors Robert Engle, Thomas Sargent and Michael Spence are among signatories on a joint statement regarding a carbon tax

Nobel Laureate and Prof. Thomas Sargent on the US response to the financial crisis

In an op-ed, Prof. Thomas Sargent outlines the history of US fiscal prioritization

The Challenges of the Fed’s Bid for Transparency

NYU's Sargent to Receive Nobel Prize in Economics on Dec. 10

The Big Problem of Small Change