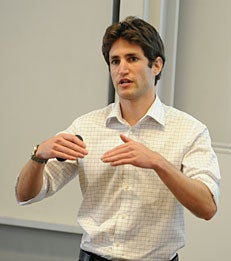 By Adam Alter, Assistant Professor of Marketing with affiliated appointment in the Psychology Department

Chronically underaccounting for these [exceptional] expenses can cause consequential errors in financial planning, resulting in over-spending and under-saving.

By Adam Alter, Assistant Professor of Marketing with affiliated appointment in the Psychology Department

Consumers and marketers alike will be interested to learn that when it comes to personal budgeting, most individuals’ mental accounting comes up short because they fail to properly allow for exceptional expenses, according to new research by NYU Stern Assistant Professor of Marketing Adam Alter.

In the typical household, the surprisingly large credit card bill that arrives each month can often be explained by such supposedly one-off events as a celebratory dinner, deck repair, or new cell phone that hadn’t been factored in, and the equally shocking bill the following month by an unanticipated root canal, and so on. All these are considered exceptional expenses, and though every month contains a few, none is ever budgeted for. In isolation, each expense seems exceptional—how often do you celebrate your tenth wedding anniversary? Or need to buy a new car?—but in aggregate these expenses occur frequently enough that they put a large dent in an otherwise carefully monitored budget.

In fact, consumers consistently underestimate the frequency and amount of such exceptional expenses, write Alter and Princeton doctoral candidate Abigail Sussman in “The Exception is the Rule: Underestimating and Overspending on Exceptional Expenses” (Journal of Consumer Research, forthcoming). “Chronically underaccounting for these expenses can cause consequential errors in financial planning, resulting in over-spending and under-saving,” says Alter.

The authors derived their insights from a sequence of studies in which participants estimated, among other things, how much they would spend on a variety of ordinary, regular expenses, and a variety of exceptional, unusual expenses. While they were able to forecast their ordinary expenses quite accurately, they spent almost double as much as they expected to on exceptional expenses. In other studies, they were willing to pay far more for exceptional goods—like a dinner date on New Year’s Eve—when they considered that expense in isolation, whereas they offered to pay far less when they considered a series of exceptional expenses at the same time. In contrast, they spent just as much on ordinary expenses—like a weekly dinner outing—regardless of whether they considered the expense in isolation or alongside other similar expenses. Put simply, they struggled to budget for the exceptional expenses, unless those expenses were presented simultaneously.

The authors suggest that this information would be helpful not just to individuals wishing to control their spending, but also to marketers, who could make purchases appear more or less exceptional by tailoring branding and other factors that influence consumers’ buying decisions. In follow-up studies, the authors are working with Eesha Sharma, a doctoral candidate in the Stern marketing department, to encourage charitable giving by framing appeals as exceptional, rather than ordinary, expenses. If people are prone to spending more freely on exceptional goods and services, they might also donate more to charitable appeals that sound exceptional or unusual.
Share / Print