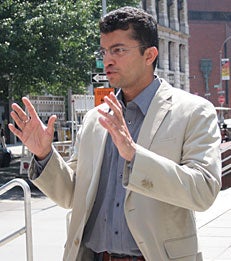 It’s only right that policymakers start to deal with crowd-funding in a serious way. The potential for entrepreneurs is tremendous, especially at a time when banks aren’t lending money.

Crowd-funding markets have recently emerged as a viable alternative for sourcing capital to support innovative, entrepreneurial ideas and ventures. In these markets, any individual can propose an idea that requires funding, and interested others can contribute funds to support the idea.

Like many socially networked ideas, this one has taken off in a viral way: Entrepreneurs are already using crowd-funding platforms to raise hundreds of thousands of dollars in pure donations. There have now been more than 10,000 Kickstarter projects funded, with more than $75 million dollars pledged and a 44 percent success rate, while ProFounder.com has reported average individual investments on the order of $1,300, with entrepreneurs typically raising more than $30,000 from the broader community toward a given project.

It’s only right that policymakers start to deal with crowd-funding in a serious way. The potential for entrepreneurs is tremendous, especially at a time when banks aren’t lending money. But is the potential for herding behavior and consequent fraud a risk that outweighs the benefits?

In the last month or so, politicians from both sides of the aisle have turned their attention to easing current restrictions on crowd-funding. As part of President Obama’s American Jobs Act, the White House announced it will work on a crowd-funding exemption with the Securities & Exchange Commission. The House Committee on Oversight and Government Reform held a full Congressional hearing on "Crowd-funding: Connecting Investors and Job Creators.” Rep. Patrick McHenry, R-N.C., introduced HR Bill 2930 (Entrepreneur Access to Capital Act) to allow an unlimited number of people to contribute a total of $5 million to a startup, with individuals’ contributions capped at $10,000, or 10 percent of their annual incomes.

While most crowd-funding offerings don't involve an "ownership" stake, and so do not involve equity sales that might concern the SEC, the tight regulation from the SEC may well be impeding some legitimate opportunities to fuel innovation and entrepreneurship. But blowing open the barn door isn’t the answer. Certain issues in the design and execution of crowd-funding platforms warrant some caution.

A novel aspect of crowd-funded markets is the nature of the publicly observable popularity indicators typically recorded and published within the marketplace. Crowd-funding involves financial investments (and future potential for an equity stake in the venture, subject to the SEC’s changing its stance) versus sales figures. Thus unlike such online indicators as sales ranks on Amazon, the popularity indicators for crowd-funding are more complex, with much deeper implications for user behavior. For instance, the information on prior investments in crowd-funded markets typically includes a time stamp and the specific amount contributed, or both.

These values contribute to what is often referred to as a project’s current ‘funding status.’ Similar in purpose to preference indicators in other marketplaces, such as click-through, purchase, or download rates, this status encompasses prior funding decisions made by others regarding a particular project, indicating the total funds raised, the number of contributors, and the duration over which that funding has taken place.

This real-time funding status provides a richer set of information than popularity indicators in more common electronic markets, and thus, lamentably, a greater potential for social influence, as it is much easier for an observer to compare the contributions of prior others to one another, as well as to his own potential contribution.

An inadvertent outcome of such comparisons is that it opens the door to various forms of gaming or fraud because of the potential for herding behavior, wherein subsequent investors follow prior investors in choosing where to invest. There is precedent for this kind of gaming in other markets. In 1995 an author and his/her publisher purchased hundreds of thousands of copies of a particular book to boost it onto The New York Times best-seller list, whereupon they recorded even greater sales. Not illegal, but ethically questionable. Further, how could crowd-funding sites guard against fake campaigns created by scam artists?

The key to easing restrictions on crowd-funding would be to create an exemption that addresses such concerns of fraud or market manipulation.

Regulators need to consider what information about the business, the use of funds raised, and the startup’s founders should be disclosed to investors. It may make sense to restrict participation by individuals or firms that have been convicted or sanctioned for prior securities fraud. An SEC filing or notice should be required so that activities in these offerings could be observed. Another question that arises is whether allowing the public to buy equity stakes through crowd-funding has the potential to create another dot-com bubble where individuals follow each others' lead in investing money with the expectation that each startup would turn out to be a Google or a Facebook? Other tough issues: whether purchased securities should be freely tradable, and whether websites that facilitate crowd-funding should also be subject to regulation.

The good news is that in our research on crowd-funded markets – specifically, crowd-funded journalism projects − we actually found opposite evidence of herding behavior, and this could alleviate some concerns about fraud. In the marketplace that we examined our results indicate that a greater frequency of support (dollars invested per unit time) is associated with lower subsequent contributions, and a greater density of support (number of supporters per dollar) is associated with higher subsequent contributions. One could infer from our results that users are concerned with providing fair consideration to all projects and ensuring the public good is met. It appears that they do this by attempting to “correct” or “address” lower contribution frequencies and higher contribution densities.

Washington needs to think of new ways to unlock capital for businesses, while still protecting investors from bad investments. I believe that the technologies that enable crowd-funding will also enable fraud protection. There were similar concerns about fraud, when eBay debuted. But eBay and others have done a stellar job in fraud prevention.

If small-dollar donors became investors with a stake in a venture, it’s both hard to imagine how energized and dynamic this marketplace would become and critical that participants would be protected. The SEC must act quickly to enable crowd-funding, and to establish the mechanisms to prevent or at least minimize fraud.