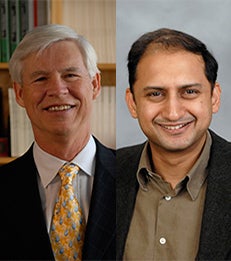 We recommend that regulatory stress tests complement their assessment of bank and systemic risks by using the simple leverage ratio-based and market-based measures of risk.

On the release of the US Fed’s latest bank stress tests, NYU Stern School of Business Nobel Laureate Robert Engle and Professor of Finance Viral Acharya warn that European regulators’ stress tests miscalculate the amount of systemic risk banks will contribute to the global financial system in the event of a future financial crisis. Why? Because the risk measures European regulators use are inherently flawed.

In a new research paper, the NYU Stern professors indicate that stress tests would be more effective if capital requirements relied on total assets and on market risk, a measure they call SRISK. Currently, European regulators use a static risk-weighted approach that fails to capture the increase of risk over time and that allows banks to skew their risk-weighted assets to meet regulatory capital requirements. While US regulators still use a risk-weighted approach, they’ve made better assumptions on net bank profits/losses in stress scenarios and have added a simple leverage ratio.

However, the authors argue that SRISK is the optimal measure for both the US and Europe, and publish a weekly ranking of banks by SRISK in the NYU Stern Systemic Risk Rankings in the Volatility Institute’s V-Lab, which Professor Engle directs.

“SRISK represents the expected amount of capital an institution would need to raise in a crisis like the last one in order to restore its capital ratio. We define a crisis as a 40 percent drop in the market equity index over six months. Importantly, our measure implicitly incorporates the asset risk of the firm as a whole, versus the current asset-by-asset approach used by regulators,” said Professor Robert Engle.

To support their recommendations, they analyzed the European Banking Authority’s (EBA’s) 2011 stress tests, which were followed by a global economic downturn. They find:

• Risk-weighted assets are inconsistent and inadequate measures that produce an incorrect ranking of the required capitalization of banks in stress tests.
• V-Lab’s measures always appear more severe than the EBA stress test outcomes. For all stress tests, the rank correlation between V-Lab and stress test outcomes increases considerably when risk-weighted assets, the denominator of capital ratios, is replaced by total assets and market risk (SRISK).
• If the EBA had used total assets instead of risk-weighted assets, the required capitalization of 53 EU banks would have increased from 1.2 billion Euros to 390 billion Euros.

“We recommend that regulatory stress tests complement their assessment of bank and systemic risks by using the simple leverage ratio-based and market-based measures of risk. We support the new Basel III Tier 1 leverage ratio, but this has not yet been incorporated into the US or European stress test design,” said Professor Acharya.
Share / Print