The Genesis Machine: Our Quest to Rewrite Life in the Age of Synthetic Biology 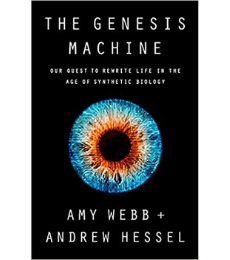 By Amy Webb and Andrew Hessel
The breakthrough science of synthetic biology and its potential for helping solve humanity's existential challenges, from climate change to the health and feeding of millions, and fighting the next viral outbreak before it becomes a global pandemic.

Synthetic biology is the promising and controversial technology platform that combines biology and artificial intelligence, opening up the potential to program biological systems much as we program computers.

Synthetic biology enables us not just to read and edit DNA – the technique of CRISPR – but also write it. Rather than life being “a beautiful game of chance,” synthetic biology creates the potential to control our genetic destiny, to say “no” to bad genes and build a veritable genetic app store for downloading and adding new capabilities into any cell, microbe, plant or animal.

NYU Stern Professor Amy Webb and co-author Andrew Hessel’s riveting stories include: the work of scientists to develop plants that can be grown in sprawling indoor farms capable of feeding millions with a fraction of the usual resources required; a synthetic, self-regulating insulin that doesn’t require injections or a pump; life-altering regenerative, personalized medicine; and novel, durable solutions to climate change. There is also whimsy, such as the dream of some geneticists to “unextinct” the wooly mammoth.

By examining both the science and the ethical, moral and religious issues surrounding synthetic biology, Professor Webb and Hessel provide the background for preventing its misuse by some to re-engineer their bodies and that of their children, further increasing the disturbing division and polarization of societies into the haves (the enhanced) and the have nots. They provide the background for making wise decisions about issues such as: whether to program novel viruses to fight diseases, what genetic privacy will look like, who will "own" living organisms, how companies should earn revenue from engineered cells and how to contain a synthetic organism in a lab.

Whether we approve or disapprove of synthetic biology, it is coming. Now, we need to understand its promise and peril. Professor Webb and Hessel help us understand the science as well as the political and societal issues involved.