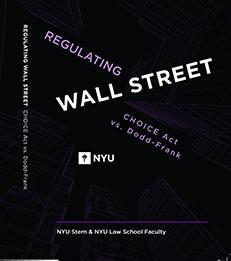 By NYU Stern and NYU Law Faculty
The NYU Stern School of Business presents a new book, Regulating Wall Street: CHOICE Act vs. Dodd-Frank, authored by more than a dozen faculty members from NYU Stern and the NYU School of Law. With the change in power in Washington D.C., both Congress and the Administration seek to repeal parts of the Dodd-Frank Act of 2010, streamline regulation and reduce compliance costs. In their analysis, the authors address the prominent issues of financial regulation and examine the benefits and drawbacks of the CHOICE Act—the prominent proposal to reform financial regulation—while comparing it to Dodd-Frank.

The book is a compilation of essays that analyze both Acts and call for significant changes. While the authors view Dodd-Frank as too burdensome, the CHOICE Act fails to address systemic risk properly. For example, the CHOICE Act’s proposed elimination of the designation of Systemically Important Financial Institutions (SIFIs) and Financial Market Utilities (FMUs), together with the Act’s prohibition of temporary government lending to resolve failing SIFIs, will exacerbate the too-big-to-fail problem. Furthermore, the CHOICE Act, like Dodd-Frank, fails to offer any solutions for Fannie Mae and Freddie Mac, for the counterproductive complexity of the U.S. regulatory structure, and for nonbanks’ de facto (“shadow”) banking activities.