Still Struggling: Migrant Construction Workers in Qatar During the Pandemic 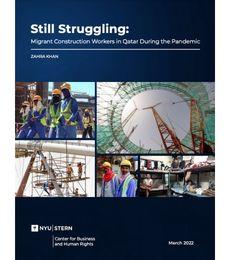 A new report from the NYU Stern Center for Business and Human Rights advocates that World Cup organizers, corporate sponsors, and national soccer teams need to put pressure on the Qatari government to enact and enforce more protective worker-welfare laws.

Millions of foreign construction workers in Qatar have been essential to the country’s preparation for hosting the World Cup in November 2022. During the pandemic, the Qatari government provided adequate, free healthcare for migrant laborers, but it did not invest comparable energy or resources in addressing long-standing economic issues. These include arbitrary wage reductions and delays and the widespread practice of forcing workers to pay for their own recruitment and transportation.

A new report from the NYU Stern Center for Business and Human Rights, “Still Struggling: Migrant Construction Workers in Qatar During the Pandemic,” argues that with worldwide attention focused on Qatar as host of the World Cup, this is an ideal moment to push for change.

Written by Zahra Khan, adjunct professor and former Center for Business and Human Rights program manager, the report notes goals the government, employers, and World Cup sponsors should aim to achieve, including:

For the Qatari Government: For Construction Companies: For the Federation Internationale de Football Association (FIFA), Corporate Sponsors of the World Cup, and National Football Teams:
Read the full report on the Center’s website here.
Share / Print ▼