When the President Calls: Conversations with Economic Policymakers 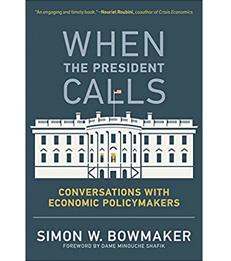 By Simon Bowmaker
What is it like to sit in the Oval Office and discuss policy with the president? To know that the decisions made will affect hundreds of millions of people?

In When the President Calls, Professor Simon Bowmaker presents interviews with thirty-five economic policymakers who served presidents from Nixon to Trump. These officials worked in the executive branch in a variety of capacities―the Council of Economic Advisers, the Office of Management and Budget, the Department of the Treasury, and the National Economic Council―but all had direct access to the policymaking process and can offer insights about the difficult tradeoffs made on economic policy.

The interviews shed new light, for example, on the thinking behind the Reagan tax cuts, the economic factors that cost George H. W. Bush a second term, the constraints facing policymakers during the financial crisis of 2008, the differences in work styles between Bill Clinton and Barack Obama, and the Trump administration's early budget process.

When the President Calls offers a unique, behind-the-scenes perspective on US economic policymaking, with specific and personal detail―the turmoil, the personality clashes, the enormous pressure of trying to do the right thing while the clock is ticking.