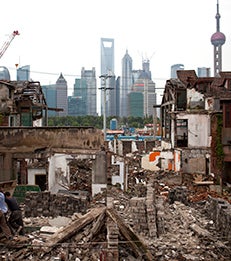 What’s striking about Shanghai is the rural-urban dichotomy, or the old vs. the new.

Hi, I’m Ben Pelled, a second-year MBA student at NYU Stern, and a few months ago I decided to take a bold step and spend my last semester studying abroad in Shanghai, China. I see this as a once-in-a-lifetime opportunity to learn firsthand about one of the world’s oldest civilizations; to witness a country going through the greatest transformation in modern times; and to expand my global network and create career opportunities for myself in the world’s fastest growing economy in the last 20 years.

I am looking forward to having a great time but also know that I will face many new challenges. After leaving my home country of Israel and moving to New York 9 years ago, I can tell you that there’s no better way to learn about the world, and about yourself, than stepping out of your own ‘territory’ and living in a new place far away from home.

First Two Weeks in Shanghai: Welcome to The Future

Have you seen the Spike Jones movie “Her”? If you haven’t, I highly recommend it. If you have, you probably remember the futuristic version of LA that serves as the setting for the movie, with its supertall skyscrapers and elevated walkways. Well that futuristic version of LA is in fact Shanghai’s Pudong district – a big swamp in 1990 transformed into a futuristic playground for architecture within 20 years. Check out this cool picture of Pudong and see for yourself:

What’s striking about Shanghai is the rural-urban dichotomy, or the old vs. the new. Since a big part of the population consists of migrant workers who came from other parts of China, including rural areas, and since the city still has old buildings and infrastructure which dates hundred or more years back, you do see such striking contrasts virtually everywhere. Many times I find myself walking in streets full of mom-and-pop restaurants, barbershops and old lane houses that probably don’t look much different than what they looked like in the 20s and 30s of the previous century – when Shanghai was known as Paris of the East. Just a few blocks ahead I would pass by glitzy malls full of stores of the world’s most luxurious brands (even though these stores are largely empty). 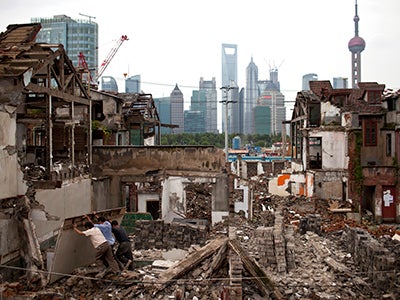 There are many reasons why I should feel foreign in China: First and foremost, there are barely any non-Chinese people around. On a typical day in the city I pass through thousands and thousands of Chinese people but only a handful of non-Chinese. The only places where I would see foreigners as a group would be at Fudan University, with my international exchange program or when we go out at night in the former French Concession part of Shanghai, or the Bund, where other foreigners like to go out. I’m also the only person in our group of 30 international students coming from the United States (most are European), and the only Israeli. To add to that, as someone who grew up in Israel and have lived in New York, I come from cultures that embrace individualism, while the Chinese culture embraces collectivism. Those are two totally different ways to prioritize an individual’s relationship to themselves, their family and society and that affects our way of thought, our behavior and our actions.

Having said all that, I actually don’t feel so foreign here. Perhaps it’s modern China that is being westernized in recent years, or perhaps it is me who has read and studied so much about high-context, collective cultures such as the Chinese culture. I also sense some of the similarities between the Chinese culture and the Jewish culture that I have heard and read about. The Chinese are actually very open and welcoming and I am starting to feel at home here in Shanghai.

If you're guessing that life in China could be a bit challenging for foreigners (especially for those who doesn't speak Chinese) – you're guessing right. It ranges from being a little challenging to extremely challenging, depending on how well you adapt and blend in with the local people, and what attitude you take when things aren't as easy and familiar as they are back home. My attitude is to look at every challenge as a learning experience. So what about the language barrier? I am already learning Chinese and practicing it on a daily basis (but it’s super hard). Ordering food at restaurants? If there's no English menu, I ask for a menu with pictures and pick a dish that looks good, and if the menu doesn’t come with pictures, I simply look at what other diners are eating and point at that. In 99% of the cases, the food I chose was tasty and satisfying!

This week was our program’s first week in session, and my first class was “Power and Negotiation.” In our first meeting we jumped right into simulations, and I was assigned the role of the seller of a house while my Chinese counterpart was acting as the buyer. While the final selling price we agreed on was exactly in the middle, compared to the other classmates’ closing prices, I thought that I could have achieved a better result (i.e., sold the property at a higher price). I realized I had made a mistake by starting too low and learned my first lesson in negotiation: start at a price much higher than the price you expect to get (if you’re the seller), and a price much lower than what you expect to pay (if you’re the buyer), and make sure you find out as much as you can about the other party: what their needs are, their interests, their constraints, etc. The more information you gather, the better tools you will have to negotiate prices, create options, etc. Even though these lessons sounds basic and are familiar to all of us, there’s no better way to learn them than by practicing them in a live simulation.

That’s it for now, I promise to write again soon! 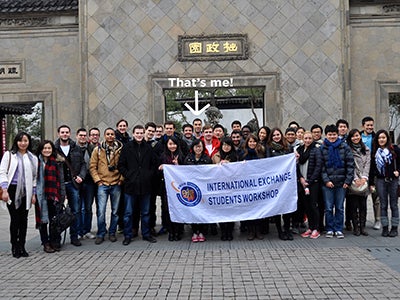