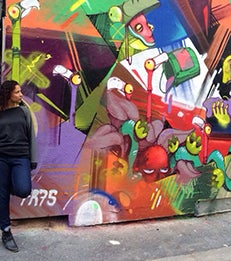 Stern is located in an easily accessible neighborhood that is in the middle of a city that never sleeps. While the name “HEC Paris” implies a similar experience in a different metropolitan location, the settings couldn’t be more different.

Bon Soirée! Since my last blog entry focused on general advice for studying abroad, I thought that I should focus further on providing a comparison between HEC Paris and NYU Stern. Both schools are recognized for their excellent MBA programs, a testament that top full-time programs can vary tremendously in length, curriculum, structure and campus locales. Program Length and Structure
Like most full-time MBA programs in the US, Stern offers a two-year academic program with an internship in the summer between the two academic school years. Sternies – as we like to call ourselves – are grouped by academic year and then further into blocks. At HEC Paris, students are in a three-term, 18-month program and grouped by the term in which they entered. For example, there is a “September 2013” intake and a “January 2014” intake. Unlike most US programs, many HEC students do not obtain internships over the summer due to the fact that French internships are typically a six-month commitment, and too long for the allotted summer break. In response to this restriction, HEC Paris’ coursework is altered in a way to allow its students to still benefit from an internship if they chose to pursue one.

Core Courses, Electives and Specializations
Both Stern and HEC Paris begin the first academic term with a set of core classes that are very similar. At Stern, the semester system continues and students can select up to three specializations, choosing from a number of elective courses for their three remaining semesters. By and large, electives are 3.0 credit courses that last the entire length of the semester or 1.5 credit courses that are for one-half of a semester. At HEC Paris, students spend their second term taking electives, or in an internship or in a study abroad program. In the third (and final) term, HEC Paris students have the option of focusing on a specialization such as marketing, finance or entrepreneurship.

The most significant difference between the structures of the programs is that many of the elective courses at HEC Paris are scheduled like intense seminars rather than semester-long classes. For example, a small business course (equivalent to a 1.5 credit class at Stern) that I took at HEC Paris was for two-to-four hours a day for eight days, rather than once a week for six weeks. This structure worked out really well for me because it meant that I could take one class at a time, allowing me to immerse myself in the subject matter more fully than I could if I was dividing my time between four or five courses at once.

Big Apple vs. City of Lights…sort of
Stern includes its location in its mantra, “Downtown, down to earth, down to business.” For many people, including myself, attending school across the street from Washington Square Park was a huge selling point of the program. Stern is located in an easily accessible neighborhood that is in the middle of a city that never sleeps. While the name “HEC Paris” implies a similar experience in a different metropolitan location, the settings couldn’t be more different. To be clear, HEC Paris is not located in the city of Paris. In fact, Versailles is the closest city to the campus. From many neighborhoods in Paris, HEC is a more than a 90-minute commute using public transportation, and most HEC students that choose to live in Paris own a car to make the distance manageable. That said, HEC Paris boasts a spacious, picturesque campus -- yes that's right, a contiguous patch of land reserved for the use of HEC students that includes a lake, athletic fields and facilities, a hiking trail and access to premium on-campus housing. For someone like me, who did undergrad in a city (Go Bruins!), worked in a city and then attended Stern, this part of attending HEC Paris was a welcome change. Walking through the town of Jouy en Josas on a beautiful Friday afternoon to witness a wedding party exiting the community church on my way to class was a once-in-a-lifetime experience, and a fitting reward for the travel required to get there. Look out for my next blog entry in which I will list a few of my favorite things to do and see in Paris as well as a sample of the many standout classes at HEC.

As I sit in a crowded airport after a mini European holiday, my thoughts are dominated by two things: a sense of gratitude for this once-in-a-lifetime opportunity and a cautious optimism for a break in the transportation strikes in Paris on Monday.

After arriving in Paris in the middle of April, I have attended a course led by the former CEO of Louis Vuitton, joined a learning community that boasts a diversity of backgrounds that I never could have imagined and spent approximately three hours per day commuting to a campus located in a tiny village that is serviced by one train line. The educational experience at HEC is first-class – more on that later. For my first blog, I decided to focus on the practical side of studying abroad at HEC.

My first piece of advice to those who choose to study abroad is to talk to as many current students as possible. Without them, I would not have learned about the private bus that HEC offers that cuts the commute time in half (very important when facing the aforementioned public transportation strikes) or the MBA Tournament, "MBAT," in which hundreds of business school students from all of  Europe converge at HEC to participate in events ranging from rowing to salsa dance. Second, there are many days of rain in the spring. The result of such weather is the most beautiful gardens that I have ever seen but come prepared with a good umbrella and a list of museums to visit during the season. Third, try to resist the temptation to travel every weekend. Paris and its surrounding regions offer much to see and experience, so take the time to soak it in!

___
Erin Aarsvold is a second-year MBA student focusing on luxury marketing and entrepreneurship. She is joining the Luxe products division at L'Oréal USA in August.
Share / Print