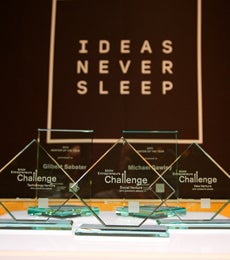 At the conclusion of an eight-month competition, NYU’s most promising innovators received a combined $200,000 in start-up cash at the annual $200K Entrepreneurs Challenge, held by NYU Stern’s W. R. Berkley Innovation Lab (iLab). The four winning teams – composed of students, faculty and alumni from across the University – were chosen after pitching their ideas and enduring Q&A by judges from venture capital, technology and design, and social enterprise sectors. 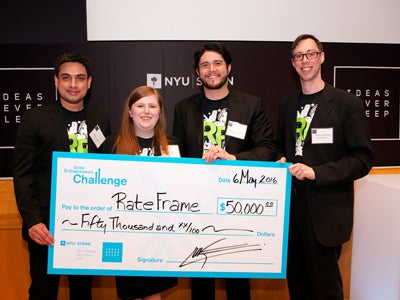 Also receiving a nod from the judges, and $25,000, was Sani, a start-up offering meal replacements that are personalized for an individual’s nutritional needs.  Founded by NYU Stern undergraduate students Sebastian Garcia and Danielle Soto, Sani provides $5 meals and helps consumer reach their health goals. 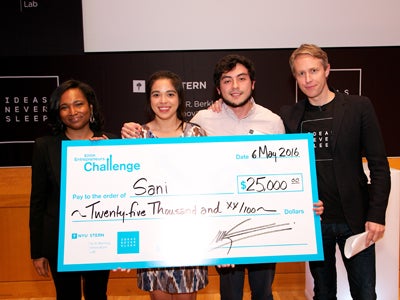 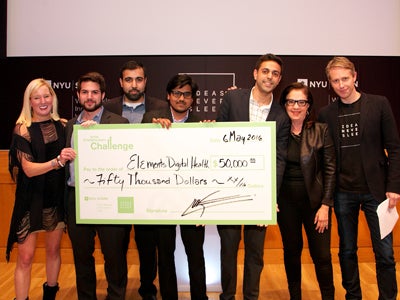 “Over the past eight months, our 12 finalists worked exceptionally hard with our coaches, mentors and evaluators,” explained Luke Williams, executive director of NYU Stern’s W. R. Berkley Innovation Lab. “In the end, each team emerged with a new business concept.”

"Great entrepreneurs focus on building a strong team," said Frank Rimalovski, executive director of the NYU Entrepreneurial Institute and managing director of the NYU Innovation Venture Fund. "This year's finalists went beyond school walls to build their teams from over five different NYU schools and colleges tapping into the incredible talent available across the University. The Entrepreneurs Challenge is a great opportunity for them to come together and receive the training, support and mentorship to transform their ideas and bring it to market."

“This year, we saw new ventures addressing a number of business, global and societal issues.  Finalists in the Social Venture Competition are developing an Internet-based healthcare offering for patients in rural areas, an online marketplace to connect small farmers and buyers, and a platform to connect high school students with nonprofit organizations that need help expanding their social media presence and measuring their social impact,” said Jill Kickul, director of Stern’s Program in Social Entrepreneurship.

Each finalist team delivered a three-minute pitch followed by a short “Explainer Video” before an audience of NYU students, faculty and alumni, who voted for their favorite teams.  This year, AlexaPath, Grou and Negotiatus received the Audience Choice Awards.

In recognition of the critical role volunteers play in mentoring, coaching and judging the teams throughout the competition, Gilbert Sabater and Michael Gawley received this year’s Volunteer-of-the-Year Award, presented by the Berkley iLab’s Loretta Poole.

The winner of Stern’s new Mobile App Contest, “Mission: Appossible,” was also announced: PocDoc.  More than 120 applications were received in the Contest’s inaugural year, from which three finalists vied for a chance to have their app fully developed by Messapps, a New York-based design and development studio, or $10,000.  The People’s Choice Awards in this year’s Mobile App Contest went to MySecret, TapIn and LifeBucks.


Watch the webcast of the event: