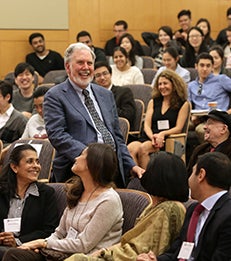 President Sexton described NYU as the “first ecumenical university, located in the world’s first ecumenical city.”  Describing NYC as a “community of communities,” composed of individuals from around the world with neighborhoods reflecting nearly every country across the globe, he argued that New York embodies the virtues of ecumenism – embracing others and ourselves through a new world view and celebrating our differences.  NYU, he argued, is deeply intertwined with New York City itself and by virtue of its founding vision – Albert Gallatin’s idea of being “In and of the City” – is similarly committed to ecumenical ideals: welcoming and supporting diversity.

He also shared a few pieces of advice with students: 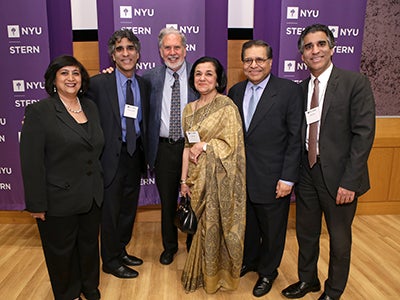 About the Ashok C. Sani Scholar-in-Residence Lecture
Ashok C. Sani (BS ’74), for whom this lecture is named, was a distinguished graduate, successful entrepreneur, president of C.G.S. Industries Inc., loyal supporter of NYU, and the founding member of the NYU Stern Alumni Council. The Ashok Sani Scholar program shares Mr. Sani’s interest in ethics, truth, peace, compassion and the moral and social responsibilities of members of society with the NYU Stern community.
Share / Print