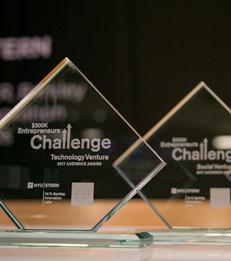 At the conclusion of an eight-month competition, NYU’s most promising innovators received a combined $300,000 in start-up cash and valued services at the annual $300K Entrepreneurs Challenge, held by NYU Stern’s W. R. Berkley Innovation Labs. The five winning teams – composed of students, faculty and alumni from across the University – were chosen after pitching their ideas and enduring Q&A by judges from venture capital, technology and design, and social enterprise sectors.

May 5 marked the culmination of one of the largest and most rigorous venture competitions in the world. Some 186 teams comprising more than 600 students, faculty and alumni from 16 schools across NYU’s global network competed this year in one of three challenges: New Venture, Social Venture and Technology Venture. The awards presented in each category were:

Winner of the New Venture Competition: for startups in a variety of sectors
The $100,000 Rennert Prize, made possible by a gift from Stern Board of Overseers member Ira Leon Rennert (MBA ’56) was split between Knowu ($25,000) and Resprana ($75,000).

Founded by Stern alumnus Eugene Joseph (BS ‘11) and Dr. Arun Manoharan, former researcher with the NYU Center for Genomics and Systems Biology, Knowu optimizes the microbiome to improve the health of those with chronic conditions.

Winner of the Social Venture Competition: for social impact and financial sustainability ventures
The $75,000 Social Venture Prize was split equally between Hakook and Share Meals.

Winner of the Technology Venture Competition: to bring intellectual property developed at NYU to market
The $100,000 Technology Venture Prize was awarded to Geopipe. Founded by Thomas Dickerson and Courant alumnus and Professor Christopher Mitchell, Geopipe uses algorithms and machine learning to create highly detailed virtual models of the real world.

The Technology Venture Competition is sponsored by the NYU Innovation Venture Fund.

“Our finalist teams worked tirelessly with the guidance of our coaches, mentors and evaluators over the past eight months,” explained Luke Williams, Executive Director of NYU Stern’s W. R. Berkley Innovation Labs. “In the end, each has emerged with a new business concept.”

"This year's finalists tapped into the incredible talent available across the University,” said Frank Rimalovski, executive director of the NYU Entrepreneurial Institute and managing director of the NYU Innovation Venture Fund. "A strong multidisciplinary team is essential to startup success. The Entrepreneurs Challenge is a great opportunity for entrepreneurs from across NYU to come together and receive the training, support and mentorship to transform their ideas and inventions into scalable businesses."

Each finalist team delivered a short pitch followed by a short “Explainer Video” before an audience of NYU students, faculty and alumni, as well as members of the broader NYC startup community, who voted for their favorite teams.  This year, Resprana, Bridge the Gap and MediVis received  the Audience Choice Awards.

In recognition of the critical role volunteers play in mentoring, coaching and judging the teams throughout the competition, Tobey Nelson received this year’s Volunteer-of-the-Year Award, presented by the Innovation Labs’ Cynthia Franklin.

The winner of Stern’s Mobile App Contest, “Mission: Appossible,” was also announced: Run On.  More than 131 applications were received in the second annual Contest, from which five finalists vied for a chance to have their app fully developed by Messapps, a New York-based design and development studio, or $10,000.  The People’s Choice Awards in this year’s Mobile App Contest went to Cluster.