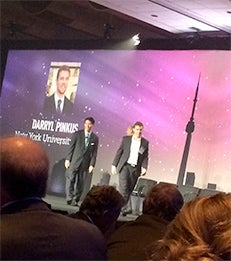 Connor Lynagh, Darryl Pinkus, Andrew Ralph and Michael Sutcliffe were awarded first place in the Case Analysis category for their paper, “The American Airlines Bankruptcy,” which examined the events leading up to the AMR Corporation’s (the parent company of American Airlines) bankruptcy filing and the company’s subsequent reorganization. In their paper, the students determined that bankruptcy had been the right decision for AMR.

Raphael Charbit, Daniel Reagan and Justin Siken were awarded second place in the Case Analysis Category for their paper, “Lyondellbasell,” which examined the merger of Lyondell Chemical and Basell Polyolefins in 2007 and the company’s bankruptcy filing one year later.

The Carl Marks Student Paper Competition “recognizes outstanding student achievement in the field of corporate renewal, as well as provides research that may offer new insight into the profession.” The competition judges evaluated the papers based on criteria including “relevance to issues pertinent to corporate distress, financial restructuring, and reorganization; well-written, clearly constructed, and thorough treatment of the subject; originality of the subject and its interpretation; and depth and quality of analysis.”