NYU Stern Emphasizes that Diversity and Inclusion are part of “EQ” 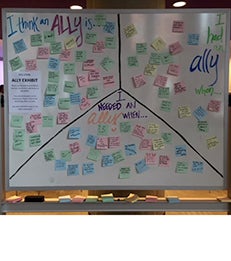 NYU Stern MBA students have committed to supporting one another as Allies via an Ally Pledge that has garnered 75% participation across the student body. This pledge capstones a year in which Stern has introduced multiple initiatives to enhance diversity and inclusion in the School’s community.

In April, NYU celebrated Ally Week to promote the practice of “Allyship,” defined as the active and consistent practice of unlearning and re-evaluating beliefs and actions, as a person seeks to work in solidarity with a marginalized individual or group of people. In the past, Ally Week at Stern focused on being an Ally to the LGBTQ community. This year, the School expanded upon Allyship to be inclusive of all community members, in order to focus on how all can be Allies to one another. This Allyship initiative is a first among business schools.

Throughout the academic year, Stern has also facilitated dialogue on difficult topics through a newly created forum called “Stern Speaks.” During Ally Week, Stern’s diversity committee and Ally Week team planned a week-long series of events, including student- and faculty-led discussions on “Allyship,” unconscious bias and the experience of being an Ally. Students participated in lunch circles to practice discussing tough topics involving race, gender, military issues and more, and in a “Stern Speaks” forum, three student speakers discussed moments when they needed an Ally and how they give back by being an Ally to others. Three LGBTQ Ally Trainings were conducted to give MBAs pragmatic tips on how to be an Ally at Stern and in the workplace. Also timed to Ally Week, a gender-neutral restroom was instituted and opened on each floor of the School, going well beyond a student request for a single restroom in the building.

With the leadership of Stern’s MBA club, OutClass, the Stern community has also undertaken multiple new efforts in support of Stern’s LGBTQ students in particular. Almost 200 administrators and faculty, including the Dean, received formal LGBTQ Safe Zone training, and, with the support of Stern’s Association of Hispanic and Black Business Students, incoming MBA1s received diversity training. At the start of the admissions cycle, the School added an option for LGBTQ self-identification to the MBA application. In October, Stern sent one of the largest contingents of students and administrators to San Francisco for the annual Reaching Out MBA (ROMBA) Conference, which included Stern-facilitated admissions, alumni and career events. Just before the conference, Stern also announced that the School was an inaugural participant in ROMBA’s Reaching Out LGBT MBA Fellowship. ROMBA highlighted NYU Stern's leadership in attracting and supporting LGBTQ students in a report released in January 2015, in which Stern was recognized as having the second largest LGBTQ population as a percentage of students among business schools.

“Stern has gone above and beyond this year to provide a supportive space for students to talk about difficult topics that affect all members of our community,” notes MBA student and Outclass President Rachel Hurnyak, who has been a strong advocate of Stern’s diversity efforts. “My generation wants to discuss these issues. By learning how to broach tough subjects like discrimination and unconscious bias, Stern students are preparing themselves for the type of leadership required in the 21st century.”

Share / Print
I believe that all people deserve to feel safe and supported. That means that I pledge to do the following: