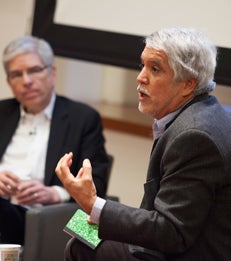 ... before you say what kind of city you want, you need to ask how you want to live.

As a part of the Conversations on Urbanization series held by NYU Stern’s Urbanization Project, former Bogotá Mayor Enrique Peñalosa spoke with Paul Romer, Director of the Urbanization Project and Professor of Economics, in a public presentation on February 12. During the conversation, Peñalosa emphasized the need for city officials to address inequality by prioritizing public space and public transport, to make life enjoyable for all residents and not just those who can afford cars and the best living spaces. He also stressed the need for new and growing cities to purchase sufficient land to allow for abundant public space, including parks as well as road, biking and pedestrian ways. In creating plans for new cities, he advised, “before you say what kind of city you want, you need to ask how you want to live.”