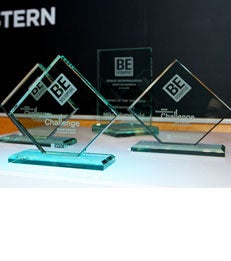 Great inventions have a long path from idea to commercialization.

At the conclusion of an eight-month competition, NYU’s most promising innovators received a combined $200,000 in start-up cash at the annual $200K Entrepreneurs Challenge, held by NYU Stern’s Berkley Center for Entrepreneurship & Innovation. The three winning teams – composed of students and alumni from across the University – were chosen after pitching their ideas and enduring Q&A by judges from venture capital, technology and design, education and social enterprise sectors.

The $75,000 Rennert Prize, made possible by a gift from Stern Board of Overseers member Ira Leon Rennert (MBA ‘56), was awarded to HireCanvas. Co-founders Scott Holand (Stern MBA ’14) and Kevin George are creating a better campus recruiting experience for recruiters, universities and students by managing data at campus recruiting events.

The $50,000 Social Venture Prize went to Codesters. Gordon Smith (Stern MBA ‘06), Manesh Patel, David Oblath, Prerak Shukla, Joe Schinasi, Revell Horsey, Thomas Ricard and Juan Farfan have teamed up to teach a million kids to code. They have created a tool for schools and teachers that integrates a cloud-based coding environment with a coding curriculum. They also offer teacher training and support.

“Over the past eight months, our 12 finalists were provoked, prodded and praised by our coaches, mentors and evaluators,” explained Luke Williams, executive director of NYU Stern’s Berkley Center for Entrepreneurship & Innovation. “In the end, each team emerged with a new business concept that imagines a powerful market disruption and a plan to transform it into reality.”

“Great inventions have a long path from idea to commercialization,” said Frank Rimalovski, managing director of the NYU Innovation Venture Fund and executive director of the NYU Entrepreneurial Institute. “The Entrepreneurs Challenge provides entrepreneurs from across the University with the training, support and incentives to get potentially life-changing innovations into the marketplace.”

“This year, we saw new ventures addressing a number of business, global and societal issues including: training the next generation of digitally savvy entrepreneurs, developing infrastructure for sustainable food production and distribution, and ensuring access to financial services in the developing world,” said Jill Kickul, director of Stern’s Program in Social Entrepreneurship.

The Final Pitch-Off was conducted before an audience of NYU students, faculty and alumni, who were also given a chance to vote for their favorite teams. This year, HireCanvas; Atikus Insurance; and Ex Vivo Dynamics, received the Audience Choice Awards.

In recognition of the critical role volunteers play in mentoring, coaching, and judging the teams throughout the competition, Mike Blumenfeld received this year’s Mentor-of-the-Year Award, presented by the Berkley Center’s Cynthia Franklin and Loretta Poole.