The Neuroscience of Leadership 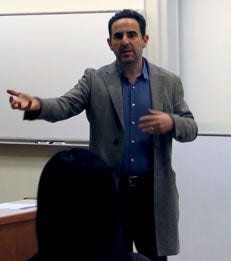 In a discussion hosted by NYU Stern’s Leadership Development Initiative, Dr. David Rock, Co-founder and Director of the NeuroLeadership Institute, spoke to MBA students on March 27 about key neuroscience research findings that have implications for improving leadership best practices.

Dr. Rock discussed neuroscience findings in leadership-relevant areas such as productivity, engagement and talent development. He noted that leaders need to become both more goal-oriented and more people-oriented as they move up within organizations. However, he explained, neuroscientists have discovered that people’s brains generally have the capacity to focus on either goals or people, not both: “When you’re people-focused, you’re not goal-focused. And when you’re goal-focused, you’re not people-focused.” Dr. Rock cited research that found only 0.77% of leaders are proficient in both areas, and asserted that organizations frequently run into trouble when leaders “think through a strategy and plan, but don’t think through how people will react to it.”

Dr. Rock also discussed neuroscience research on threats and rewards as they relate to the workplace, such as the threat responses that are elicited when a manager walks in a room or when people feel left out, and he discussed ways in which managers can understand and manage these responses.
Share / Print