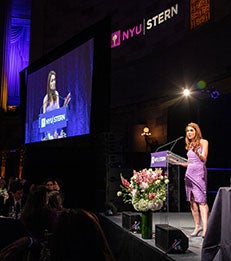 September 17, 2019, New York, NY—Today, New York University’s Stern School of Business announced that it received a $5 million gift from alumna Elizabeth Elting (MBA ’92), the single largest gift from a self-made woman in the School’s history.  With this support, Elting aims to champion the next generation of talented and entrepreneurial women affiliated with her alma mater, an intention that aligns with the mission of the Elizabeth Elting Foundation she now runs after a successful business career leading the multi-million dollar global translation business she founded in a dorm room at NYU in 1992.

This landmark gift to Stern by a female entrepreneur will, over the course of 10 years: Additionally, a large-scale convening space for classes, lectures and guest speakers in the graduate building will be named The Elizabeth Elting Lecture Hall in recognition of Elting’s significant commitment.

This past May, for her many years of dedication, service, and philanthropy, the School honored Elting at its annual Haskins Giving Society Award Dinner with an award named after Stern’s founding dean, Charles Waldo Haskins, in recognition of his commitment both to business and to public service.

“Liz is a self-made entrepreneurial success story and a tireless advocate for women,” said Raghu Sundaram, dean, NYU Stern. “She is a superb role model for aspiring entrepreneurs and exemplifies how business and philanthropy need not be mutually exclusive, but rather mutually reinforcing. We are so grateful to Liz for her support of Stern through a meaningful commitment that inextricably links her with innovation at the School.”

“Starting my own business is the best and most rewarding decision I ever made for my life,” said Elting. “It gave me the resources I needed to provide for my family and influence the world for the better. That’s why I’m so excited to provide this gift to NYU Stern. This money will not only make Stern accessible to a greater number of ambitious young women eager to create their own futures, but will also help the best and brightest launch new enterprises and carry out visions that could transform the world. As an NYU Stern alumna that has received so much from this school, I wanted to give back and do my part in lifting up the next generation of forward-thinking women leaders.”

About Liz Elting
Liz Elting, Founder and CEO of the Elizabeth Elting Foundation, is an entrepreneur, business leader, linguaphile, philanthropist, feminist, and mother. After living, studying, and working in five countries across the globe, Liz started TransPerfect out of an NYU dorm room. During her tenure as Co-CEO, she grew TransPerfect into the world's largest language solutions company, with over $600 million in revenue, 4,000+ employees, 11,000+ clients, and offices in more than 90 cities worldwide. Liz has been recognized as a NOW "Woman of Power & Influence," American Express' and Entrepreneur Magazine's "Woman of the Year," one of Forbes’ "Richest Self-Made Women," and is a recipient of the 2019 Charles Waldo Haskins Award for business and public service from NYU’s Stern School of Business.

The Elizabeth Elting Foundation is committed to promoting progressive and feminist efforts to eradicate systemic barriers, promote public health and education, achieve workplace equality, rise beyond the glass ceiling, and open the doors to economic independence.

About New York University Leonard N. Stern School of Business
New York University Stern School of Business, located in the heart of Greenwich Village, is one of the nation’s premier management education schools and research centers. NYU Stern, whose faculty includes four Nobel Laureates in Economics, offers a broad portfolio of programs at the graduate and undergraduate levels, all of them enriched by the dynamism, energy and deep resources of one of the world’s business capitals. Visit www.stern.nyu.edu and follow NYU Stern on Twitter: @NYUStern.