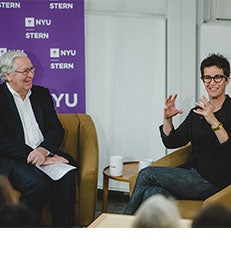 People see through artificiality. Those who succeed are the ones who are genuine.

NYU Stern hosted the first installment of the "In Conversation with Mervyn King" series featuring Rachel Maddow, host of the Emmy Award-winning "The Rachel Maddow Show" on MSNBC. Lord King, former Governor of the Bank of England, Baron King of Lothbury, Alan Greenspan Professor of Economics and Professor of Economics and Law at NYU, moderated the one-on-one interview, followed by an open Q&A session.

Maddow shared her background and career path with a packed room of students. She described the rationale behind her show’s format and her overall approach to television: “I try to explain things in a way that adds to people’s understanding of the news, our country and our politics.” She also touched upon pressing topics including the upcoming presidential election and the changing media landscape.

Maddow concluded with a few words of wisdom to students as they pursue their own journey: View the full event
Share / Print