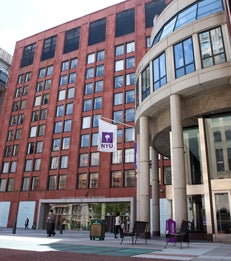 Thanks to the generosity of NYU Trustee Larry Silverstein, Arts ‘52, New York University Stern School of Business has established the William R. Berkley Scholars Fund, and provides $1 million endowed scholarship to support high-achieving, low-income students admitted to the Undergraduate College. The gift, made in honor of William R. Berkley (BS ‘66), Chairman of the NYU Board of Trustees and former chair of the Stern Board of Overseers, is one in a series of scholarship donations that enable Stern to open its doors to bright and deserving students, regardless of their ability to pay.

This funding marks another step forward in NYU’s Momentum Campaign, with the goal of raising $1 billion in six years for scholarships. For Stern, Silverstein’s generosity helps bring the School’s total to over $100 million raised to meet its students’ financial need.