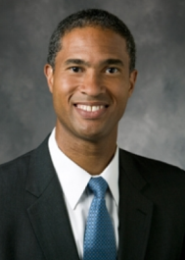 A Rhodes Scholar; the leader of the Obama Transition Team’s review of the International Monetary Fund, World Bank, and other international lending agencies; and an economic advisor to governments from the Caribbean to Africa, Dean-designate Henry’s scholarship focuses on the impact of economic reform on emerging economies.

NYU President John Sexton said, “After some time, one can read the ‘body language’ of a dean’s search committee. Seldom – if ever – have I seen greater certainty or more enthusiasm for a candidate for a deanship. And when I met with him, it was immediately apparent why: a superb and highly productive economics scholar, a natural leader, a community-builder, and a manifestly good person, Peter Blair Henry has just the attributes to lead NYU’s business school. He thinks long-range and strategically, and he has committed his research to grappling with profoundly important questions about our world: how do we reduce poverty in emerging economies? What’s the positive role of global business? How can we best harness globalization to allow poor countries to prosper? No surprise, then, that he immediately comprehended the unique moment in which higher education finds itself now, and the unique position the Stern School occupies – enjoying NYU’s unequalled global network of academic facilities, and intimately connected to the world’s business capital – and understood that NYU and he were a perfect fit for one another.

“I would like to thank the members of the search committee – led by Prof. Eitan Zemel – for their efforts in delivering to the Stern School a dean of such outstanding talent. The success of their hard work and discernment will resonate for years to come.

“And I would like to thank Tom Cooley. Accomplished comrade, upholder of high standards, and dean extraordinaire – we were blessed to have Tom as dean of the Stern School since 2002, and we are grateful for his dedicated service.

“On behalf of the entire NYU community, I want to congratulate and welcome Peter Blair Henry.”

Provost David McLaughlin said, “Peter Blair Henry’s outstanding stature as a scholar reflects NYU’s finest tradition as a research university and the academic priorities of our faculty. But he brings to this deanship something more, something just as important: the Stern School is poised to be recognized as one of the truly top business schools in the country, and the character and self-confident leadership he possesses is precisely what the school needs now to achieve that. We welcome him to NYU; we are glad to have him here, and we know he and the Stern School will accomplish great things together.”

Peter Blair Henry is the Konosuke Matsushita Professor of International Economics, the John and Cynthia Fry Gunn Faculty Scholar, and Associate Director of the Center for Global Business and the Economy at the Stanford University Graduate School of Business, where he was first appointed an assistant professor of economics in 1997. He is also a Senior Fellow of the Stanford Institute for Economic Policy Research and the Stanford Center for International Development, a Research Associate at the National Bureau of Economic Research, a Nonresident Senior Fellow of the Brookings Institution, and a member of the Council on Foreign Relations. Henry is President of the National Economic Association and received the Association’s dissertation prize for his doctoral thesis. From 2000-2001 he was a National Fellow at the Hoover Institution, and from 2001-2006 he held an Early CAREER Development Award from the National Science Foundation. Most recently, he was appointed by President Obama to the Presidential Commission on White House Fellows.

The author of numerous articles and book chapters, Henry is best known for a series of publications in the three flagship journals of the American Economic Association that overturn conventional wisdom on the topics of debt relief, international capital flows, and the role of institutions in economic growth: “Debt Relief” Journal of Economic Perspectives (Winter 2006); “Capital Account Liberalization: Theory, Evidence, and Speculation” Journal of Economic Literature (December 2007); “Institutions vs. Policies: A Tale of Two Islands” American Economic Review (May 2009). He is currently writing a book for Oxford University Press.

In 1991, Dean-designate Henry received a B.A. in economics with distinction and highest honors from the University of North Carolina at Chapel Hill, where he was elected to Phi Beta Kappa, won the Walter S. Spearman Award, and was a Marshall Scholar-elect. He received a B.A. in mathematics from Oxford University in 1993. He received his Ph.D. in Economics from the Massachusetts Institute of Technology in 1997.
Share / Print
Back to Top