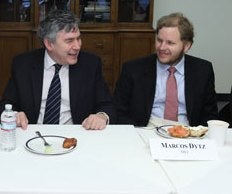 The Right Honorable Gordon Brown, former prime minister of the United Kingdom, sat down with a select group of MBA, executive MBA and undergraduate students from NYU Stern to discuss the economic crisis, the role of policymakers in preventing future crises and the growing interconnectedness of world economies.

Later that same day, Brown met with several Stern faculty to share his perspectives on the state of the world post-financial crisis, globalization, emerging markets and the role of Europe and the United States in the world-wide economic recovery.