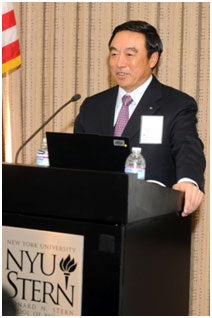 At NYU Stern in April, CEO and President of China Merchants Bank Dr. Weihua Ma addressed students, professors and the press about the globalization of the Chinese banking industry and his bank’s vision for success in the global markets.

View the streaming video of the event (note: Dr. Ma’s speech is in Mandarin).

Dr. Ma explained the effect of the financial crisis on global markets. He believes that China was able to rebound quickly from the financial crisis because China has not yet fully engaged with the global economy, calling it “beginners’ luck.” He said China is just now beginning to explore greater opportunities worldwide.

Dr. Ma believes that China Merchants Bank maintained its strong performance because of several key factors. Chinese banks in general experienced increased profitability after 2008, and collectively extended more than RMB 9.6 trillion in loans in 2009 alone. Although Chinese engagement with the international markets is still limited, Chinese banks are experiencing greater global visibility, and are offering stronger competition to the established banks of the United States and Europe. In 2008, China Merchants Bank opened a branch in New York, its first location in the US.

Outlining several motivations for China to explore global markets, Dr. Ma explained that the Chinese market is currently experiencing increased demand for financial services from corporate and retail consumers. Chinese banks are also experiencing demand to compete with foreign institutions from the US and Europe. He believes that these forces, combined with the deleveraging of foreign banks and economies, have provided previously unforeseen opportunities for China to engage in international markets. He said that China Merchants Bank hopes to take advantage of these opportunities to expand its business by creating an overseas presence and acquiring businesses in target markets.

Dr. Ma concluded by sharing his outlook on the future of the Chinese banking industry. He hopes that China will become much more involved with global financial markets, and he is very optimistic about possibilities in the US. Through several strategic transformations involving a new focus on globalization, management and customer service, he said that China Merchants Bank has successfully established itself as a global brand, and is continuing to transition to meet the needs of consumers across the globe.
Share / Print
Back to Top