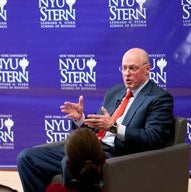 Former Treasury Secretary Henry Paulson was interviewed by Morgan Stanley Chairman John Mack before an audience of hundreds of NYU Stern, Law School and Wagner Graduate School of Public Service students and alumni on March 3 at the Stern School of Business. CNN Money taped the event and broadcast it intermittently the following day.

>>View the CNN coverage of the full interview, as well as three shorter segments.

Drawing from Paulson’s new book, On the Brink: Inside the Race to Stop the Collapse of the Global Financial System, Paulson and Mack discussed the historic decisions and events surrounding the Treasury’s response to the worst financial crisis since the Great Depression.

Paulson provided an inside story of the people and politics behind those momentous events. He said, “[President] Bush understood the markets. …He wasn’t a fan of Wall Street. He clearly didn’t come to Washington to bail out banks. But he understood how important it was to our economy and to jobs to do what needed to be done. He was engaged and encouraging, … and he was very supportive of me. …There were times that he practically mothered me to get me through [the crisis].”

Paulson argued that “there is plenty of blame to go around” for the financial downfall, including with Wall Street, the regulatory system, and U.S. housing policies. He said the markets will come back slowly and are based on confidence, and he admitted that government officials “missed the American public’s anger.”

While Mack credited Paulson with keeping him “pumped up” throughout 2008, he confessed that he hung up the phone on Paulson when Paulson pressured him to sell Morgan Stanley in an attempt to prevent a possible collapse. Paulson said he feared that if Morgan Stanley or another big firm crashed after Lehman Brothers, the country would have fallen into “something equal to what we had in the Great Depression.”

In Mack’s last question he joked that the movie version of Andrew Ross Sorkin’s Too Big To Fail would feature Robert DeNiro portraying himself and Danny DeVito playing Goldman Sachs CEO Lloyd Blankfein. He asked Paulson, “Who should portray you?” Paulson first answered with “a young Paul Newman.” But after a bit more thought, he said, “I’m afraid you’d have to bring back Yul Brynner.”
Share / Print
Back to Top