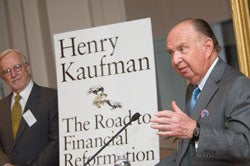 More than 100 alumni gathered at NYU Stern on September 17 to celebrate the publication of Dr. Henry Kaufman’s (BA ’48 (Heights), PhD ‘58) newest book, “The Road to Financial Reformation: Warnings, Consequences and Reforms,” and to hear his prescient insights into the mistakes that led to the financial crisis and his recommendations to prevent its repetition.

A dedicated alumnus of NYU and Stern, Dr. Kaufman led Salomon Brothers’ four research departments, and has been an investment manager and economic and financial consultant for more than a quarter century. Dr. Kaufman spoke of the last 60 years as the “greatest transformation of financial markets,” and noted that eventually the markets and institutions themselves were at risk. Enormous financial concentration, extraordinary changes in the behavior and power of institutions, changes in attitudes toward liquidity and instant access to borrowing, failure of financial regulation in the US -- all contributed to the financial crisis that unfolded a year ago. He credited the Administration with acting decisively, but predicted that unless lessons were learned, the country would be facing the same problems in three or four years. Large financial organizations are “wards of the government,” he said, and a “trend toward a socialistic society will be hard to resist.”

Dr. Kaufman also credited his NYU education, saying, “I learned a lot of fundamentals that left an imprint and guided me and influenced my career. I will be forever grateful and indebted.”
Share / Print
Back to Top