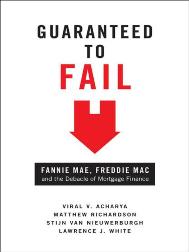 The four Stern professors propose a new model of mortgage finance that shifts guarantees from the government to a fully privatized system.

Get Flash Player to see this video.

Fannie Mae and Freddie Mac, the government sponsored enterprises (GSEs) that were originally designed to expand the dream of home ownership to millions of Americans, have cost taxpayers $150 billion to date as bad loans collapsed during the financial crisis, and the cost continues to grow. Stern Professor Acharya, Richardson, Van Nieuwerburgh and White ask, “Where is the outrage? Fannie Mae and Freddie Mac are where they are because they were run as the largest hedge fund on the planet.”

Their recommendations for reform enter the discourse as Washington policymakers consider plans to reform the mortgage finance system, a key omission from The Dodd-Frank Act.

In their new book, the four Stern authors argue that the private, not the public sector, should manage the mortgage finance system. They call for government to provide side-by-side guarantees – only in the interim – that explicitly use market-based pricing that the private guarantors set.

Learn more about Guaranteed to Fail