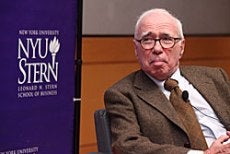 “New York is the apple of the universe,” said Felix Rohatyn, Lazard investment banker, former US Ambassador to France and author of Dealings: A Political and Financial Life, before an auditorium filled with close to 150 students and alumni from NYU Stern, as well as students from NYU’s School of Law and Wagner Graduate School of Public Service. Martin Lipton, chairman of NYU’s Board of Trustees, sat down with Rohatyn to discuss his new book and lessons learned from a life spent in the City’s political sphere and financial sector. 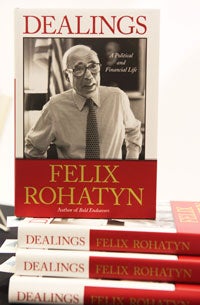 Credited with saving New York City from bankruptcy in the 1970s, Rohatyn drew some conclusions about today’s political and financial landscape. The psychology of making deals used to be very different.” He recalled how labor leaders, bankers and the governor of New York came to the table to brainstorm a solution. With open minds and backing from the President of the United States, Rohatyn remembered how varied interest groups and leaders recognized the direness of the situation and made the necessary sacrifices to save the City. “I don’t think that would be possible in today’s society,” he said.

According to Rohatyn, the US has not moved in a favorable direction: “Today, politics have become overwhelming.” Pointing to the incredible influence that Wall Street has on Washington, he called for the elimination of lobbying. Looking at the more recent financial crisis, Rohatyn argued, “legislation can be improved, but nothing will completely protect us from a collapse.”

Noting the uncertainty surrounding the current fate of New York State among others, Rohatyn called for a MAC, Municipal Assistance Corporation, for all states, and championed the creation of a national bank to finance state and local infrastructure projects. He also stressed the importance of reviving the nation’s “social contract,” in which every sector of society – schools, manufacturing, government, etc. – unites to face challenges and address current issues.

Having engineered some of the most celebrated and controversial Wall Street deals, involving Warner Bros., MCA, GE and RCA, that reshaped the American business landscape, Rohatyn reflected on some of his toughest deals and the challenges he faced battling egos and striking compromises.

Sharing some career tips, Rohatyn encouraged students in the audience to: