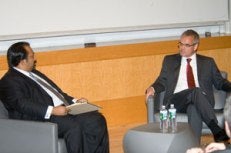 With ailing U.S. automakers receiving government bailouts, the CEO Series on April 7 with Stefan Jacoby, President and Chief Executive Officer of Volkswagen of America, Inc., proved to be especially timely and of interest to the hundreds of NYU Stern students and alumni who attended to hear Jacoby speak.

Interviewed by Vijay Vaitheeswaran, a correspondent for The Economist, who teaches the popular Energy and the Environment course at NYU Stern, Jacoby was in New York for the International Auto Show where he was the opening keynote speaker and where Volkswagen introduced its new Golf and GTI sedans.

Get the Flash Player to see this player.

Asked by Vaitheeswaran how bad the auto industry is faring in the economic crisis in comparison to other sectors, Jacoby answered, "It's worse ... especially because of the global dimension. ...We're now seeing the downside of globalization. It's a global crisis ... and it came so fast. No one could have foreseen it and no one could have prepared for it."

Nevertheless, Jacoby believes that Volkswagen is better prepared than most of its competitors, which he attributes to the company's optimized product portfolio, global presence and productivity. And despite the economic turmoil, Jacoby said the company is continuing to invest in future technology and automobile models, and, in fact, is building a manufacturing plant in Chattanooga, Tennessee. "If you don't invest now, you destroy your future," he argued.

In discussing alternative fuels and zero-emission cars, Jacoby argued that automobiles will rely on fossil fuels for another 15 to 20 years because electric cars are not yet safe, affordable or reliable. He's also concerned that producing biodiesel fuels like sugar ethanol will disrupt the food chain. And he pointed to the Toyota Prius, a hybrid car, whose sales dropped in the last year as gas prices fell. "It's difficult for the industry to provide this kind of technology if consumers aren't buying it."