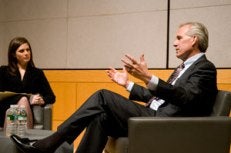 At the CEO Series on November 12, Jim McNerney, Chairman, President and Chief Executive Officer of The Boeing Company, shared his outlook on the financial crisis, giving the more than 300 Stern students and alumni who attended a critically important perspective on some of the global implications of this crisis for a major manufacturer and exporter. He also provided some cautions regarding the government handling of the rescue plan.

Get the Flash Player to see this player.
Interviewed by Erin Burnett, anchor of CNBC's "Street Signs" and "Squawk on the Street," McNerney argued that "a recession is usually led by three things: (1) a dislocation of financial markets; (2) business investments hurt by downturns in key markets; and (3) consumers. This is the first time that I've seen all three happening." He added, "We're in for a difficult time. I am anticipating a tough business environment and am beginning to take some actions to respond to it."

Despite the economic turmoil, McNerney said that he does not anticipate Boeing changing the way it invests in R&D. "We will protect our ability to invest in R&D by reining in costs elsewhere."

In answering Burnett's question about whether the green movement makes sense without massive government support, McNerney said, "In our industry, the economic and green incentives line up well — it means less emissions, less noise, reduced carbon footprint, and less cost. I think some regulation makes sense and needs to be applied." He also said, "This is not meant to be a pun, but for those in the audience looking for a green job, find one that is sustainable. Find those jobs that make a difference for consumers and companies."

McNerney went on to discuss the impact of American defense spending on Boeing, and immigration policy and its effect on companies in need of engineers. He also candidly described the upside and downside of unions for companies and the economy, as well as the competitive landscape with Airbus and the emergence of China as a future competitor.