NYU Stern, The Economist and CFR.org Debate Whether Next U.S. President Can Save America's Image 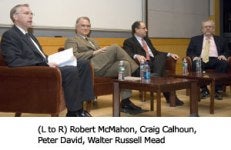 The day after Hilary Clinton's primary wins in Texas and Ohio, further delaying the selection of the Democratic candidate, NYU Stern, The Economist and CFR.org hosted the final debate of the year of the Global Issues in Campaign 2008 series, "Brand America: Can the New President Rescue America's Image."

The entire panel agreed that the Bush administration leaving office will no doubt improve America's brand, but each panelist offered different ideas on what steps the next President should take to undo the damage.

Craig Calhoun's advice to the next President is to not act as a rogue superpower, but to use diplomacy all over the world. He stressed that public relations alone will not save the U.S. image, but action in a variety of areas, from the Kyoto Protocol to the International Criminal Courts, is necessary.

What is at stake if America can not change its image? Peter David believes America's ability to mobilize other countries to cooperate in U.S. foreign policy interests such as Iraq and the rest of the Middle East relies on gaining support from foreign governments. While it appears as if pro-American governments are coming back (e.g., Sarkozy in France, Merkel in Germany), they still have to "sell" their policy positions to their electorates, who are not pro-American. According to David, immediate wins for the next U.S. President would be to dismantle Guantanamo Bay, extend the ban on torture to the CIA and sign on to the Kyoto Protocol or develop a comparable global warming initiative.

Audience members asked the panelists questions on issues such as U.S. interests in oil in the Middle East and European support for the war in Afghanistan, but not Iraq. Professor Calhoun responded to the last question of the evening — which Presidential candidate has the best opportunity to reshape America's image — saying it would be the one least associated with Bush — in order, Obama, Clinton and then McCain.

The Global Issues in Campaign 08' series will continue next year once the new President has been elected, centered on advising and analyzing his/her first 100 days in office.


Get the Flash Player to see this player.
Share / Print
Back to Top