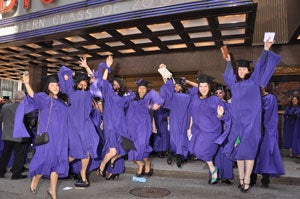 The Leonard N. Stern School of Business Undergraduate Baccalaureate Ceremony took place on Thursday, May 13, 2010 at Radio City Music Hall. Baccalaureate, which is held in addition to New York University's Commencement Exercises, honors students who have completed the requirements for bachelors degrees from the NYU Stern School. Each student is recognized individually, and prizes for extracurricular and academic achievements are awarded.

A Video Given from the Dean to the Students
This video montage about the Class of 2010 was shown at the Undergraduate Baccalaureate ceremony on May 13, 2010 at Radio City Music Hall.

Get the Flash Player to see this video.
Share / Print
Back to Top