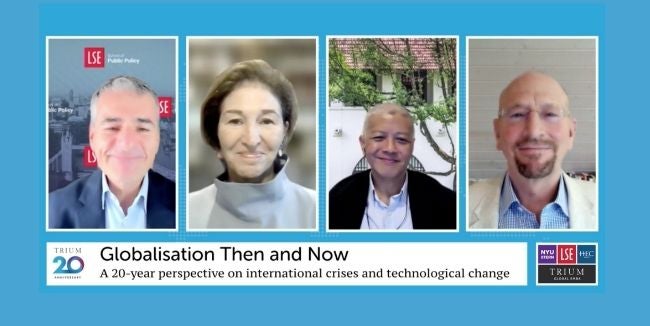 Blending the strengths of each of its three partner universities, NYU Stern, London School of Economics and Political Science and HEC Paris, TRIUM Global EMBA opened its doors 20 years ago in September 2001. The program was a pioneer as the first global executive MBA to integrate a geopolitical and socioeconomic perspective with economics and business for senior executives and entrepreneurs.

The inaugural class of 28 students was welcomed with the opening session “Globalization: What is it? And What are the Consequences?” The founding insight that drove the three top partner universities to create the TRIUM program–that globalization is the lens through which business and society would need to be viewed–was prescient and still guides the program today.

On September 9, TRIUM celebrated the 20th anniversary milestone with a virtual keynote panel for its community: “Globalisation Then and Now: a 20-year perspective on international crises and technological change.” The panel was moderated by Andrés Velasco, Dean of the School of Public Policy at the London School of Economics and Political Science. Speakers included Richard Baldwin, Professor of International Economics at the Graduate Institute, Geneva and Editor-in-Chief of Vox; Danny Quah, Li Ka Shing Professor in Economics and Dean at the Lee Kuan Yew School of Public Policy, National University of Singapore (NUS); and Anne-Marie Slaughter, CEO of New America and the Bert G. Kerstetter ’66 University Professor Emerita of Politics and International Affairs at Princeton University.

“When we launched TRIUM two decades ago, combining the academic strengths of NYU Stern, HEC Paris, and the LSE, we wanted to prepare senior leaders to navigate a world in which globalization was just beginning to impact the way people do business,” said Robert Salomon, Vice Dean, Executive Programs. “At that time, with the world becoming increasingly interconnected, globalization seemed like a given. Twenty years later, with globalization now maturing and beginning to face challenges, TRIUM has nimbly adapted its curriculum and approach to address why now, more than ever, the world remains in need of visionary and strategic global leaders.”